The creation of many video games over the years has sparked from television shows and movies. This has led to many failures, but thankfully, good ones as of late.

I had high hopes for the new “Walking Dead: Survival Instinct,” but all of those hopes came crashing down as I played through one of the worst games released this year.

“Walking Dead: Survival Instinct” came out on March 19 for all major platforms. The idea and concept of this game are awesome, but poorly executed.

The story behind “Walking Dead: Survival Instinct” is the prequel to the AMC television show “The Walking Dead,” which follows Daryl Dixon’s journey to Atlanta during a zombie outbreak.

The idea of the game is to sneak around and kill zombies while you make your way to Atlanta and scavenge for fuel to keep moving forward.

All of the scavenge missions take place in three maps over the course of the game.

The characters you encounter along the way are forgettable and expendable, with no real stories except for Dixon himself.

The only saving grace of this game is the voice acting, especially that of Dixon, played by Norman Reedus. But that still is not enough to make the game worthwhile.

The game wants you to sneak around each level and kill the zombies silently, but the flawed gameplay prevents this because you can just sprint through the various missions without any zombies following you.

Zombies will get stuck in invisible corners in the game, and sometimes they ignore you completely.

The artificial intelligence in the game is awful to say the least, making the experience that much worse in addition to the already weak storyline and disgusting graphics.

“Walking Dead: Survival Instinct” has the ideas and the background to make a great zombie survival game. Unfortunately, the game is poorly made and feels rushed.

The story lacks depth and does not connect to the television show as advertised. The mechanics, graphics and overall gameplay are some of the worst of the year.

For more information and gaming news, visit the Gamerlore website at tuckerdixon.nfshost.com. 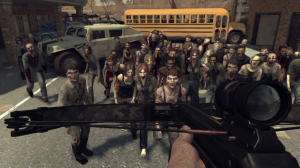