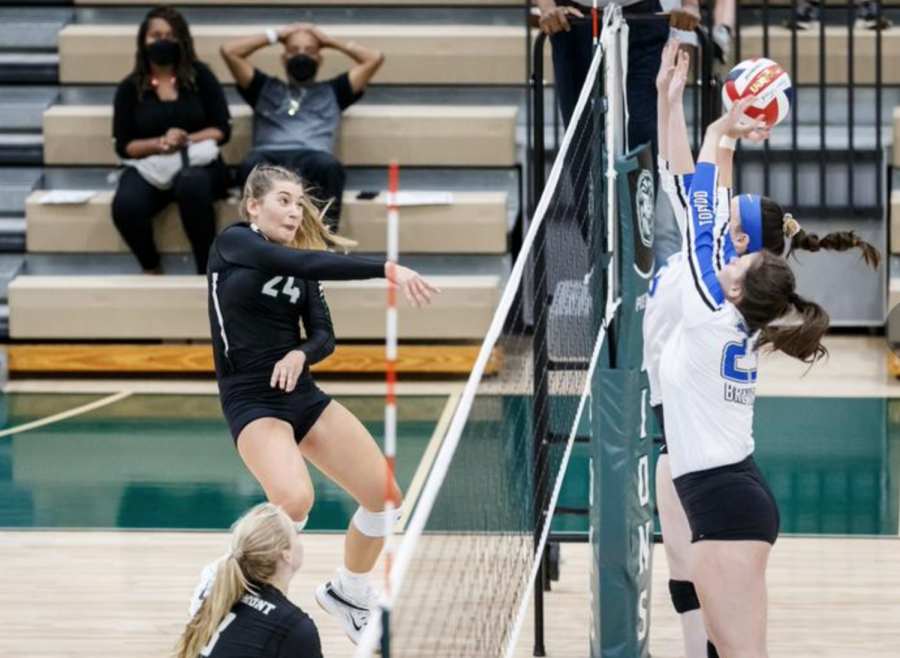 Freshman Jenna Ash had 10 kills and 23 digs in the Lady Lions' tri-match tournament on Oct. 20.

Piedmont University volleyball is coming off a great week of play in their last two tri-matches. They defeated both Toccoa Falls College and Agnes College on Wednesday Oct. 20.

The Lady Lions won those games 3-1 and 3-0. They looked to carry the momentum in their second Tri-Match of the week against Wesleyan College and Berea College. They split the two games in a 3-0 win over Wesleyan and a 1-3 loss to Berea.

“Honestly, I think our communication went really well,” says sophomore outside hitter/defensive specialist Reagan Mercado. “We went in looking for the win and we were so pumped and ready to play. I think we did play well in spite of the one loss, but I think we also played some of our hardest volleyball.”

The Lady Lions had a total of 145 kills, 43 aces, and 138 assists over the course of the four games. Leading the way in kills were the dynamic duo of junior outside hitter/right side hitter Bri King and freshman outside hitter/right side hitter Jenna Ash. The two lead the team in kills and they had a combined total of 52 kills for the four games, which represents roughly 36% of the team’s kill total. These kills came off of some great feeds by sophomore setter Brooklyn Gunn, who led the team in assists in the two Tri-Matches with 51 total assists. She represented about 37% of the feeds that resulted in points.

The Lady Lions were also on fire from the backline, serving more aces than what you would find in a mega deck. The aces were coming from a wide range of different people Junior middle blocker/right side hitter Hannah Kate Chadwell led the team in aces with 12 over the course of the four games.

The Piedmont volleyball team was as sound on defense as they were on offense. The Lady Lions exited the two tournaments with 12 total blocks 297 digs. Chadwell led the frontline with 6 total blocks, and senior defensive specialist/libero Jessica Beil led the backline with 94 digs. Freshman outside hitter/right side hitter Jenna Ash also contributed with 34 digs and sophomore defensive specialist/libero Taylor Herrmann was not far behind her with 31 digs.

Piedmont will be looking to carry over their momentum from the Tri-Match tournaments into their game at home against Bob Jones University Tuesday Oct. 26 at Cave Arena.

The Lady Lions opened up the Chick-Fil-A Collegiate Invite on Monday Oct. 25. The event had 17 teams and 98 golfers. It was located in Rome, Georgia at the Coosa Country Club.

The Lady Lions were led by freshman Sarah Fox who hit a 84 in the first round. Fox has been tremendous for the women’s golf this season. Fox finished tied for 40th after the first round.

Round two of the event is tomorrow Tuesday Oct. 26. This is the final round of the fall for the Lady Lions golf team.

“We played pretty solid the whole tournament,” said sophomore Josh Hebrink. “We all made a lot of pars and that was the game plan.”

The Lions delivered a 6-over par 290 as a team to move from eighth place up to fourth place, counting two even par 71’s and two 3-over 74’s.

Hebrink played quite consistent while firing his third consecutive even par 71, making three birdies and three bogeys on his round. He bounced back from a bogey on the par 3 16th to make birdie on the par 5 17th, nearly holding his third shot from the fairway.

“Overall, it went pretty solid,” said sophomore Eric Penland. “We had a nice last day climb up the leaderboard and beat some really good teams.”

The B team is getting ready to compete at the Chick-fil-A Invitational that will begin Monday, Oct. 25 in Rome, Georgia.

A seven-game winning streak gave the Lady Lions a #1 ranking in the USA South West Division heading into its non-conference game against the #4 team in the nation, Christopher Newport on Oct. 24.

CNU got on the board just 4 minutes into the game and never looked back. The Lady Lions would try and bounce back to get the offense rolling, but CNU dominated the ball and would score a second and third goal in the 32nd minute and 33rd minute of the game.

Senior Julia Gib and junior Kaylee King tried to even things up, but their shots were blocked. With the Lions trailing, goalie play was split in half between freshmen Laila Allen and Haylee Dorman. Both keepers would have some great saves but CNU offense would just be clicking to well, scoring again in the 54th minute and eventually winning 4-0.

CNU would end the game with 32 shots while Piedmont would only have two. The Lions return home for the conference tournament this weekend.

The Piedmont Lions soccer team will be fighting to keep their season alive as they match up against Covenant College in Lookout Mountain, Georgia.

In their last five games, the Lions are 2-3. The two wins were against conference opponents, Brevard College and Berea College. If the Lions could add another win, they could very well find themselves in the playoffs.

“This game is obviously the most important of the season. It is a must win game and we will do everything we can,” said Lule Tekilemariam.

It is very clear to the upperclassmen that this game is the key to their survival. The Lions will be taking on the Covenant College Scots on Oct. 25.

Piedmont University’s Men’s Cross Country team last cross event was almost two weeks ago on Oct.16 were they played sixth of 16 teams at the Berry XC Invitational. This past weekend the men had a week of rest so that they are prepared for the conference meet coming up.

Head Coach Jamie Jimison was very pleased with the way is team ran this season up to this point in the year. “A lot of guys ran really good times this year and a lot of new guys came in and showed that they can handle the workload, so I think we are in a good spot for conference,” said Jimison.

Looking back at the time they had off, coach Jimison also said the team had 3 focal points for their week of rest. “Mental preparation. Meaning we wanted to get their minds right and focused on the goal at hand. Recovery. Dropping training volume and managing ailments.Sharpening. Race pace training and race modeling.”

The Lions have finished in second place each of the last two years at the USA South Cross Country Championships, and look to bring home a conference title this year with the help of senior Connor Moranos and junior Gary Halverson leading the way.

The Piedmont Lions travel to North Carolina Wesleyan to compete on Oct. 30.