Living With Your Parents

“Scrubs” star Sarah Chalke is back on television.  ABC’s newest comedy, “How to Live with Your Parents (for the Rest of Your Life),” follows the story of recently divorced mother, Polly (played by Chalke), who’s trying to put her life in order now that she’s a single mother of an eight-year-old.

The first step?  Moving in with the parents for a while.

The pilot episode introduces us to the important people in Polly’s life, such as her parents Max and Elaine Green, played by Brad Garrett, popular for his role as Raymond’s brother in “Everybody Loves Raymond,” and Elizabeth Perkins, who most recently played Celia Hodes in “Weeds.”

The characters’ chemistry is beautifully comical, creating an array of awkward and uncomfortable situations for their daughter and granddaughter to deal with.

If living with your parents isn’t hard enough, Polly’s ex-husband, Julian, played by Canadian actor and comedian Jon Dore, keeps showing up at the Green household in spite of the recent divorce.

He’s not the brightest, but he’s trying his best to be helpful and present in his daughter’s life.

“How to Live with Your Parents” is an interesting sitcom so far, bringing a timely concept to the screen.

The writing is witty and the production value is what you’d expect.  Chalke is charming as Polly, and you can’t help but like her.

Her relationship with her eccentric parents creates the most comedic scenes, especially when Max and Elaine are left to care for their granddaughter for an afternoon.

This show has potential.  The pilot was humorous, but they could have taken more risks.

Since it follows ABC’s comedy powerhouse “Modern Family,” it’s likely the show will grab a chunk of that audience.

The pilot episode is worth watching, but it’s too early to form a full opinion on the show as a whole.

If it wants to survive, the next episodes need to capitalize on the eccentricities of Polly and her relationship with her parents.

Otherwise, audiences may be content with turning the TV off when the credits roll for “Modern Family.” 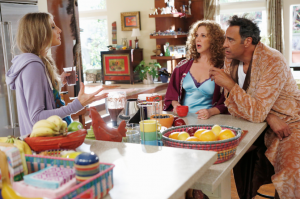