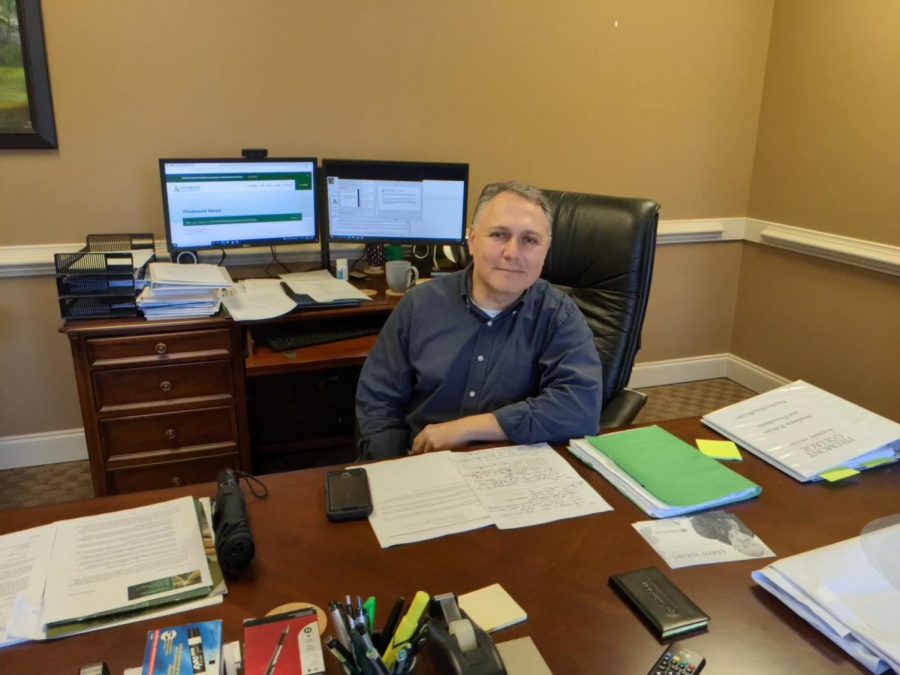 Senior Vice President of Academic Affairs and Provost Dan Silber in his office at the Demorest campus of Piedmont University. // Photo by Matt Kodrowski

Joining the Piedmont community in 2018, Senior Vice President of Academic Affairs and Provost Dan Silber understands the importance of teamwork as well as how each individual has a hand in the growth and overall quality at an institution.

After deciding he wanted to be a college professor, Silber headed to Kent State University where he taught for three years. Silber’s next stop would be at Florida Southern College for ten years, which is also where he started his career in administration. After Florida Southern, Silber and his family moved to Missouri where Silber served as Vice President for Academic Affairs and Dean of the College at Culver-Stockton.

“I worked there for six years, but it just was not the most ideal part of the country for my family and me,” said Silber. “Piedmont was located pretty ideally for my family and me, which was an important factor. I saw Piedmont had an opening as the Chief Academic Officer, which was a position I wanted to try. I think our priorities are the right priorities, it should be about students’ education. All those things were really what attracted me to Piedmont.

Like every institution, Piedmont would not function without the help of everyone involved. At Piedmont, the Board of Trustees is above President Mellichamp, who oversees Athletics Director Jim Peeples, Campus Minister Reverend Tim Garvin-Leighton, Special Assistant to President and Board of Trustees Dr. Shahryar Heydari and Executive Assistant Erin Forester.

The COVID-19 pandemic has caused us to evaluate how we live our everyday lives, and education is an important aspect of that. Students and faculty have had to be more mindful of things they never had to consider. Classes that were typically hosted completely in person had to switch to an online format.

When the pandemic first hit and Piedmont was forced to go completely online, this showed that online learning at Piedmont was not only possible, but a plausible alternative to become a more accessible campus.

“Hopefully our online programs will continue to develop and mature and attract more students,” said Silber. “We want to be able to meet the needs of non-traditional or post-traditional students who are looking for an opportunity to advance in their lives and careers. We’ve got a great team over in the office of academic technology, they develop these really great courses and programs.”

In the spring of 2021, Piedmont College officially became Piedmont University. This not only means each academic school becoming a college and Piedmont as a whole becoming a university, but growth in the student body.

Mystic Hall is the newest residence hall being added to Piedmont and with plans to complete construction by the end of the fall 2022 semester, this new building is set to house almost 270 students. Growing Piedmont’s numbers is a part of the strategic plan for Piedmont, as well as a personal goal Silber would love to see.

“Within the next five years, I would love to see us grow,” said Silber. “This is a part of our strategic plan, which we keep revising, but over the next three year timeframe we are really trying to increase our residential population up to a thousand.”

Housing is not the only thing that is required for the student body to grow, Piedmont also needs to stay up to speed with the increasing demand for different majors and academic programs.

“In order for us to reach our goal and grow, not only in the student body but as an institution, we have to have enough programs, as well as a diversity of programs, to make us attractive to that greater number of students,” said Silber.

If Silber’s goal is to become a reality, Piedmont needs to become a household name. Being well-known in the area is a part of this, but it also means recruiting students from different parts of the country.

“I’d like to see us get our name out more,” said Silber. “Piedmont is one of Northeast Georgia’s best kept secrets, which is great, but we shouldn’t be kept a secret. We should be known out there in the world. I think Piedmont’s best days are probably ahead of it and I’ve considered myself very fortunate to be able to contribute to that.”