A Review of WandaVision 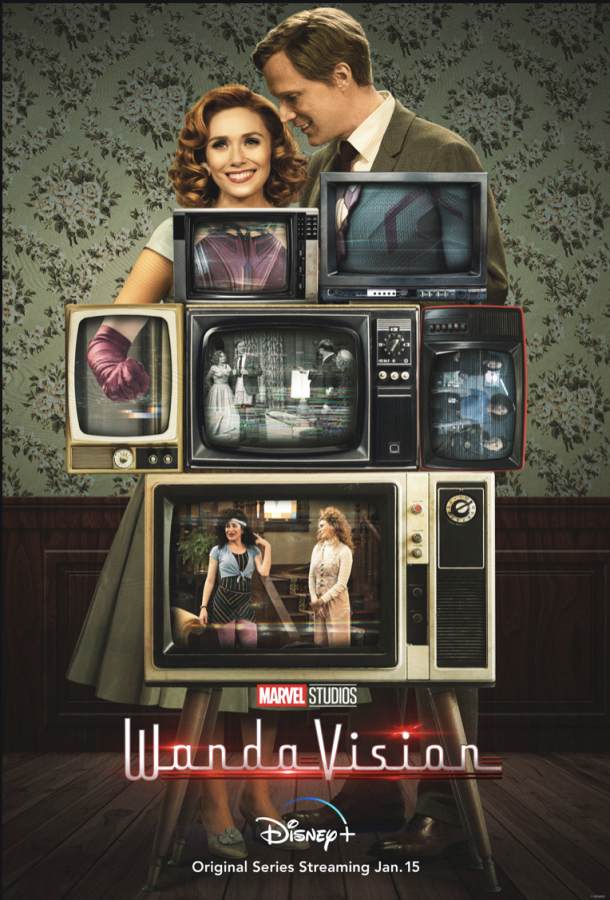 Marvel’s phase four of the Marvel CInematic Universe officially kicks off with the new sitcom-turned-drama, “WandaVision.” The first thing you need to know about “WandaVision” is that this show doesn’t look like, sound like, or even resemble a normal superhero movie or show; “WandaVision” is odd. The show looks back at the timeline of the Scarlet Witch and Vision, her infinity-stone-powered, synthetic lover. This series is Marvel’s first Disney+ series, and it looks like nothing we’ve seen in the cinematic universe before.

“WandaVision” is arguably Marvel’s strangest project and is unrecognizable from any Marvel feature film, with both Wanda and Vision acting very strange and abnormal.

“WandaVision” opens as a 1950s sitcom starring Wanda and Vision. With Wanda being a witch and Vision being a human cyborg, you must know these details in order to understand the quirky jokes and awkwardness presented by the show. For the most part, the show lacks an obvious villain, and the main obstacle for the couple is to not be so obviously superhuman in their new, loud, overly flamboyant, chaotic home.

Each episode loosely reflects a new time period and decade, with the first episode being entirely black and white, resembling a true show of the 1950s. The show progresses at a fast pace, and by the end of episode two, color is added to reflect the 1960s. Episode three is primarily based in the 70s. By episode four, the show finally begins to come together, and you will be captured, trying to understand this interesting sitcom-turned-drama.

For new viewers, I recommend keeping your eyes open and your mind open, and try to get through the awkwardness of the sets as you accept each episode’s reality. If you are looking to have a fast answer as to why and how Vision is returning after he died in Infinity War, “WandaVision” will not be your quick fix. However, this question that plagues us all will be answered. This show is step one in understanding what the Post-Thanos Marvel Universe will look like.

“WandaVision” is making a bold entrance into Marvel’s phase four, and most viewers who watch the show will continue to fall in love with both Wanda and Vision. The exciting plot engages you to try and comprehend the oddly humorous twists. After episodes two and three, viewers have started to become more intrigued and interested in what’s to come for the rest of the series. Episode four is the one that catches the viewers’ attention the most and seems to be that “hook” that fans have been waiting for.

“WandaVision” is providing myself, my family, and my friends something to look forward to every week. Episodes are released weekly every Friday on Disney+.