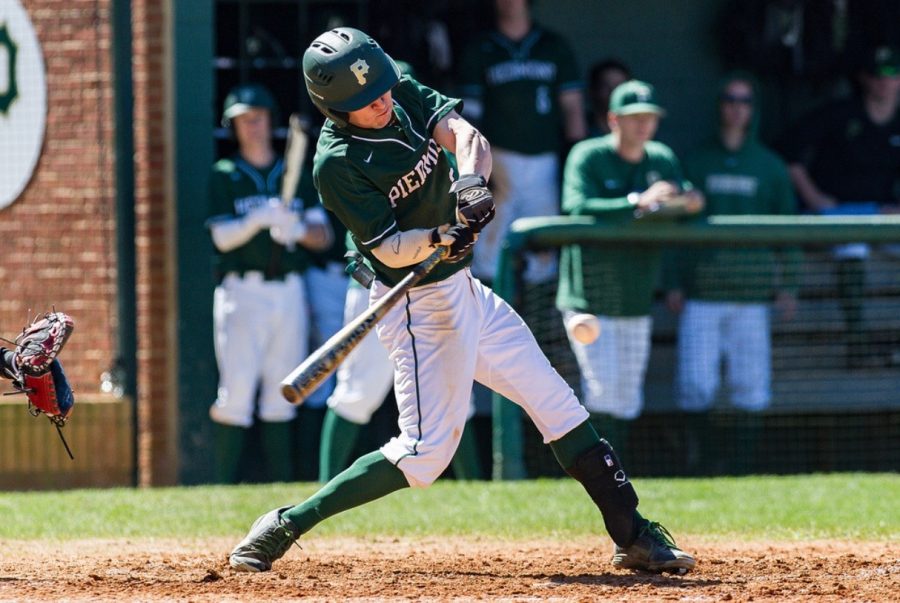 One of the two fifth year seniors on this year's team, Zach Swindell, takes a swing during the 2020 season. Swindell looks to bring leadership, high character and quality at bats in 2021. Photo Courtesy of Zach Swindell

Just like all spring collegiate sports across the country in 2020, Piedmont baseball had their season cut to an abrupt end. However, 2021 brings a new year, a new season and some new faces for the Lions, but still the same winning culture.

“Despite only playing 17 games, we did get to see some of our younger players compete and they had some great opportunities to grow and improve,” said Piedmont head baseball coach, Justin Scali. “Aside from our younger players last season, our veteran players also had opportunities to improve on the field and chances to grow as leaders– an area we rely on them for on a daily basis.”

The Lions finished the short 17 game schedule last season with a 10-7 record. Piedmont is also bringing back four of five players who appeared in all 17 games last season: sophomore James Whitmer, junior Carter Ballstadt, junior Harrison Trawick and senior Tyler Sheley. Junior Duke Wodetzski, who appeared and started in 16 games last season, is also returning for 2021.  Perhaps, the biggest name returning is sophomore James Whitmer. Whitmer is the team leading returner in both hits and RBIs; however, two special fifth year seniors are also returning for the 2021 season: Zach Swindell and Sam Carpenter.

“They will be huge pieces of our team. Sam has been a Friday starter for us each of the past three seasons and has been so solid and steady for us. As an individual, he has received many accolades for his pitching, but ultimately what he does for the team is more important and he feels the same way. He works hard to make the younger pitchers better and his impact will be felt beyond his playing days here,” said Coach Justin Scali. “Zach was voted by his peers as our teammate of the year last year, and we are thrilled to have him back. His leadership and energy are so valued by his teammates and coaches and I don’t know if I have coached a player who loves to compete, win and has more fun than Zach does at Piedmont in my 17 years here.  They both will be big parts of our 2021 season and we are lucky to have them.”

Fifth year senior Sam Carpenter is the undisputed ace on the 2021 pitching staff.  Carpenter’s 2020 season was one for the ages. He finished the season first in ERA in the USA South Conference, second in strikeouts and fourth in innings pitched.  However, statistics are not the main focus for Sam Carpenter.

“For me personally, I do not focus too much on stats during the season. For my entire career at Piedmont, I have had great defenses behind me, and I have played with some exceptional talents,” said Carpenter. “Everytime I toe the rubber, my thought process is to keep my team in the game, and continue to build and make the needed adjustments during the game. When I focus on these few things over outside things, like stats, they tend to take care of themselves.”

Zach Swindell is the other of the two fifth year seniors on the 2021 Piedmont baseball team.  “Swindy,” as he is referred to by his teammates, recognizes the importance of preparing the younger Lions for the future.

“As one of the two fifth year players that came back, I feel like I am one of the leaders on this team. We do have a lot of underclassmen and I really just try to bring the best out of them everyday and do so in a positive way,” said Swindell. “They are a really talented group, and they are the future of this great program we have here at Piedmont. So, I am really just trying to prepare these guys for this season and their future.”

Swindy was also awarded perhaps the most prestigious in-house award that any baseball player can win: 2020 Piedmont Lions Teammate of the Year. Swindell is a ferocious competitor on the diamond, but he strives to be an even better teammate off of the field.

“Being the best teammate I possibly can be really comes from the way I was raised. My parents taught me to treat people with respect and kindness. I really try to be the best person I can be in my everyday life and I think that just transfers over to baseball. So I really try to just come to the field everyday to play hard and love my teammates no matter the circumstances. I just love being out there with my guys, and having good teammates like them makes it easy.”

The only two-way player on the 2021 team is junior Carter Ballstadt.  Ballstadt is the expected starting center fielder and closer out of the bullpen for the Lions. He is ready to build on 2020, give Lions’ fans the action that they expect, but most importantly, he wants to win.

“My main goal for this upcoming season is to win. We have worked way too hard as a team and waited way too long to not win this thing. I want to bring a conference championship home for Piedmont. I know that is everyone’s goal,” said Ballstadt. “Lions’ fans are going to see a lot of energy from this team. We are ready to get out there and show our family how hard we have worked.”

The Lions will open up their 2021 season on Feb. 5 at Loudermilk Field against the Stormy Petrels from Oglethorpe University.  Piedmont College Athletics will be streaming the game live on YouTube.