Piedmont is Rapidly Sliding Down the Slippery Slope of Media Censorship 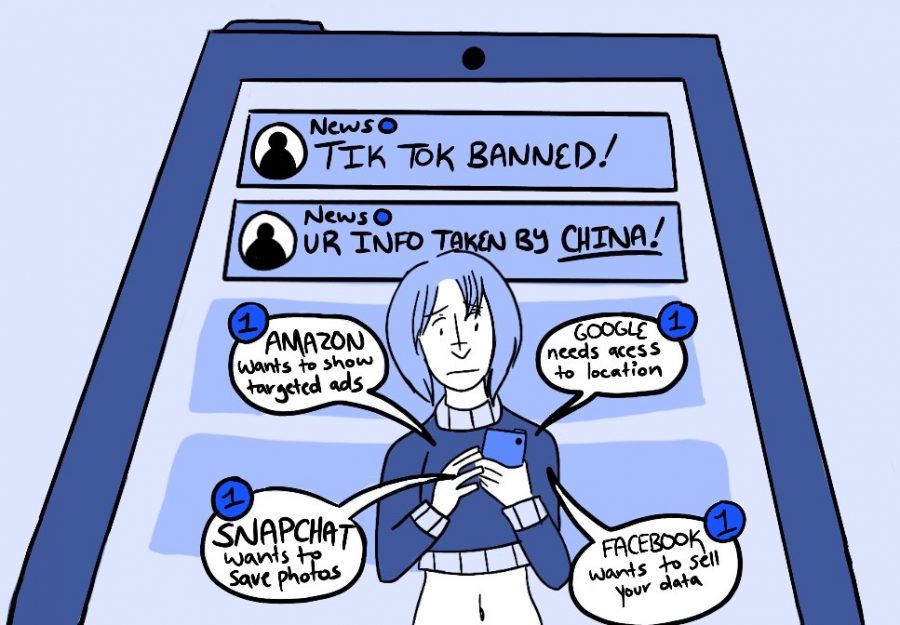 On Aug. 1, President Donald Trump announced that he would be banning the popular video-sharing app, TikTok. TikTok was owned by ByteDance, a Chinese owned company which President Trump had issues with. He was primarily concerned with national security. Before the ban could go through, TikTok made a deal with the Oracle corporation.

Despite this being a valid concern, the decision to ban an app where people are able to share their thoughts is an infringement on our First Amendment rights as U.S. citizens.

Many news outlets, both college and national, use TikTok to post informational videos, as well as short videos for entertainment. Threatening to take away an app journalists use as an aspect of their jobs goes against the freedom of the press.

Other people go on TikTok for religious purposes. People use the platform to correct misinformation and teach others about their religious practices. Even churches, such as Hillsong United and 12Stone Church, are using TikTok to reach their members during the pandemic. The threat to ban an app churches use to reach their followers and share informative videos is a threat to the freedom to religion.

Whether you enjoy the app or not, it is undeniable that the threat of it being removed from app stores in the United States goes against the First Amendment. TikTok being banned is obviously an example of a larger infringement of these rights. What about on a smaller scale?

Much like the concern of national security President Trump had with the app, the college is concerned about students accidentally or intentionally going to websites that seem safe, but are ultimately a cyber threat. Once again, this is a valid concern. The school bans websites that are graphically inappropriate as well as ones that go against their mission statement or Student Code of Conduct. That being said, some websites that are blocked are not a cyber threat.

A few weeks ago, some students brought the issue to the Piedmont App. Though some of the examples brought up in this discussion were explicit websites, students still have a right to know why content is censored on campus, and what the real criteria is for a site to be blocked.

The Student Code of Conduct stipulates the expectations the College has for the student body both on and off campus. If all students are supposed to comply with these guidelines, why are we allowed to access websites that promote the behaviors we promised not to engage in, while other sites that do not directly contradict the Code of Conduct are censored with little consistency?

Even though we can go visit websites selling illicit substances, we can be dismissed from school if we are caught with them. We can purchase from firearms and fireworks websites, but are not allowed to have any of these items on campus. We can get to various escort service websites and certain strip club websites, but not all. The same is true for adult store websites. There is nothing in our code of conduct that says we can’t look up pornographic content or have adult products, but certain websites like the Bellesa Boutique or Adam and Eve are blocked alongside websites like OnlyFans. LitErotica is blocked, yet we can check out certain books with adult themes in the library.

College students are also naturally curious about their bodies. As the Roar has noted before, We do not offer any sort of sex ed class. Students are forced to look online for answers to the questions they have, yet some educational websites like Bad Girls Bible are blocked by Piedmont’s server. The same is true of body modification, whether that be tattoos or piercings, which a multiplicity of Piedmont students have. It is not against the Student Code of Conduct to have them, but for students with questions about their current or future piercings, educational websites like Piercing Bible are unable to be reached without turning off WiFi on their personal devices.

While the First Amendment does cover the type of speech found in the aforementioned websites, no matter how offensive some may find it, Brandenburg v. Ohio ruled that hate speech is not covered by the First Amendment. The American Civil Liberties Union stated that the difference between free speech and dangerous conduct is the threat of violence targeted at a specific person, group or groups. Westboro Baptist Church, Stormfront, American College of Pediatrics, American Border Patrol/American Patrol and the Knights of the Ku Klux Klan do just that but are all websites that students can readily access, despite aggressively promoting hate speech, discrimination and dangerous conduct, going against our Student Code of Conduct.

To maintain the integrity of our campus cyber security, we recognize that certain websites do need to be blocked so that the risk to the entire server is a minimum. However, media censorship is a slippery slope and is usually based around morality. Piedmont’s community does not operate on the same moral compass, therefore it is difficult to come up with one set of rules for the entire community. Although it is difficult, everyone being held accountable by the same code of conduct is a good place to start.

It is easy for the students to find out what should be blocked by looking through these rules, but there are times where some things that should be blocked are not, and vice versa. The school needs to be more up front and honest about what they are blocking, because there are multiple discrepancies between what is blocked and what is not. If the school is going to censor certain websites from students, we have the right to know why. We want to ensure that the college is not taking advantage of their power by blocking websites that just make them uncomfortable.