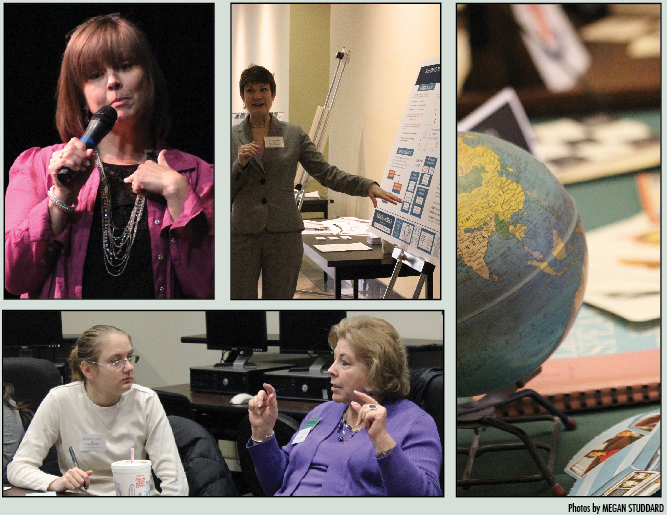 Educators and students from across Northeast Georgia came together in the Swanson Center for the first annual Piedmont Educator Renewal Conference this past Saturday.

The event began with all who attended gathering in the W.R. Cleere Mainstage Theatre for the introduction titled “Celebrating All That is Good… Laughing at Ourselves.” Hilton Smith, dean of secondary education, was recognized by the education department as “A True Friend of Education.”

“It was a surprise, but it was very affirming,” said Smith.

This recognition was soon followed by comedienne Dannette Flint. She entertained the crowd with jokes involving personal stories of her experience as a secretary in a public school.

The crowd separated when the workshops began. Attendees were given the choice of two different workshops before lunch.

A pair Piedmont professors, Gene Pease and Susan Smith-Patrick, generated one of these workshops. Their workshop was called “Fifty Shades of Practicum and Field Experience.” They decided to team up and present their ideas because they felt it was important to share ideas about host teaching, according to Smith-Patrick. The duo has coordinated trips for students in the past and are both in early childhood education, so pairing up felt natural to them.

“It was a great opportunity for us and Piedmont,” said Smith- Patrick.

According to Judith Perry,   associate professor of education, Pioneer Regional Educational  Service Agency (RESA) partnered with the education department for the conference, allowing Piedmont to give teachers credits to renew their degrees.

Pioneer RESA also assisted with registration and evaluation. Piedmont just recently joined as one of the 13 schools associated with Pioneer RESA.

“Piedmont is the first private school associated with a RESA in Georgia,” said Perry.

According to Tiffany Collins, administrative assistant for the school of education, there were just under 200 people attending the conference. She says that next year they are planning on more.

Don Gnecco, dean of the school of education, believes that all of the people the attended will become “walking commercials.” He explained that after they experience what they did they will go back to their counties and tell everyone how great the conference was.

“This conference helped me to get a better idea of what teaching will be like,” said theatre education major  Jason Sheffield.

Sheffield, along with many other students attending, was there to gain  six credit hours of field experience.

Monique Frazier, a teacher from Gwinnett County who is currently enrolled in Piedmont’s doctoral program, came because of her current classes. She was attending a class that afternoon that was planning on having a discussion on what each student learned at the conference.

“As teachers, we are always looking for new ways to do things,” Frazier said.

At lunch, President James Mellichamp, gave a short speech thanking those who attended.

“I think it is a wonderful opportunity for many people in North Georgia to see the successful education programs here,” said Mellichamp.

After lunch, educators and students alike had one more workshop to attend.

Kathy O’Keefe and Randy Hollandsworth, education professors at Piedmont, led the workshop “The Effects of Stimulation-Based Teacher Training on Pre-Service Teacher Self-Efficacy.” They did research on the topic and wanted to share what they had found. When asked if she will speak next year, O’Keefe said, “I don’t know. If we did more research and were selected, I would.”