The Lions lacrosse team added a win to their season over Bridgewater College Wednesday, March 13 at the Walker Athletic Complex.

In a close match-up, Piedmont won 5-4, putting them on a two-game winning streak and giving them an overall 5-4 record for the season.

The Lions controlled all three face-offs and answered back with a goal at the end of period by Spencer Ortis, leaving the Lions trailing 2-1.

Starting the second period, Sumner Gantz picked up his third face-off victory thus far in the game, and Branson Mikell put his first points on the board, bringing the game to an even 2-2 in the first minute of the second period.

However, Bridgewater answered with another goal with seven minutes left in the period, sending the Eagles up by one into the half.

The Eagles started the third period with a face-off victory, but Taylor Carter would go on to score two goals.

Nick Green scored the third goal of the period, assisted by Gantz, and put Piedmont up by two as they headed into the final period of the game.

The Eagles went straight to work in the fourth period, scoring within the first three minutes of the period, which  brought them within one point of the tie.

However, the Lions’ defense would prove too tough for the Eagles to penetrate, and Piedmont rendered them scoreless for the rest of the game.

The Lions also led in face-off victories, dominating the Eagles 9-3. However, Bridgewater led the game in shots at 46-20.

Carter led the Lions in scoring with two goals scored. Mikell, Green and Ortis all scored one point each.

“I am confident in this team and the remainder of the season,” said Mikell.

“I look forward to winning all the rest of our games this season, they are all winnable, and there is no team we can’t beat, as long as we play as a team.”

The Lions have had a shaky start to their season. After winning the first three games, they had a four game losing streak. However, Piedmont bounced back and secured their second straight win.

“It started with the freshmen coming in, and they hadn’t played with us yet, so it’s kind of a learning process,” said Gantz, who picked up two assists and 4-6 face-offs in Wednesday’s game against Bridgewater.

“Now, [the freshmen] have started to work harder, and have slowly started to realize the way that we play… We had a huge emphasis on effort. Coach stressed if we give a hundred and ten percent it will pay off. And it did.”

The Lions return to play on March 20 against Centre College in Atlanta. 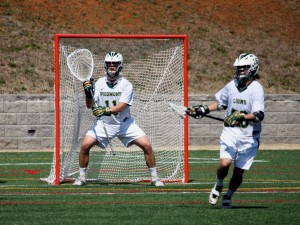