‘Atypical’ Proves to be an Inclusive Heartfelt Dramedy 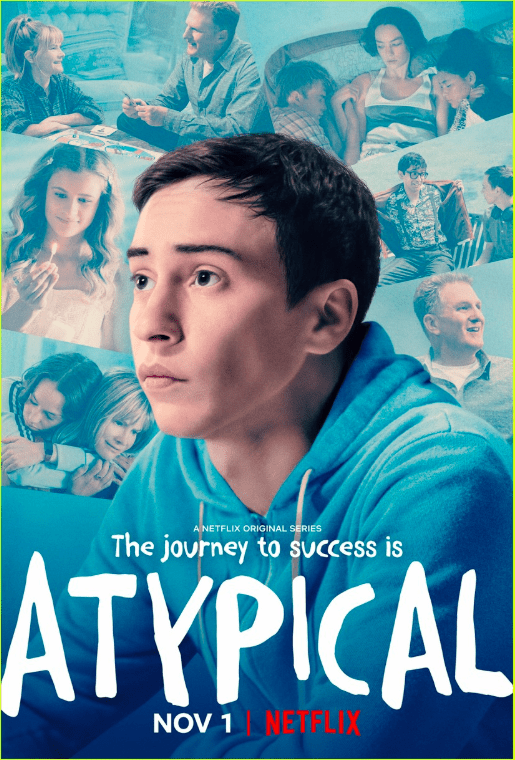 “Atypical” is a Netflix Original and a heartfelt dramedy show. Season three of “Atypical” was released on Netflix on Nov. 1, 2019.  “Atypical” is about a character named Sam who has autism and is starting his first year of college. One of the reasons “Atypical” is my favorite show is because it portrays the struggles people living with learning disabilities face, and that they can still achieve.

I loved watching the first and second season of “Atypical” last year, so once season three was released, I binged watched it.  Season three was just as good if not better than I expected.

I really like how season three shows the main character, Sam, struggle as a freshman in college with autism.  In “Best Laid Plans”, the first episode of season three, Sam obsessively worries that he will not be able to graduate from college because four out of five students with autism do not graduate.

Sam also struggles with time management and other challenges while enrolled at Denton, which is the college that he attends.   Sam originally does not request accommodations for his disability, but after he struggles in class, he decides to apply for services.  While in the room for disability services, he is introduced to other students who are receiving accommodations. Sam later gets a note taker as part of his accommodations, and that helps him feel more comfortable and confident in class.  While I could relate to meeting with the disability support coordinator and how beneficial it is to receive accommodations, “Atypical” did not portray everything accurately. Unlike what was shown in “Atypical,” it is confidential, which students are receiving accommodations.  Even though not everything was portrayed accurately, overall I still like these scenes.

Part of the reason why I really liked the show “Atypical” was because I found Sam to be relatable.  When I was a freshman, I struggled a lot in college too, and used to obsess over whether or not I would be able to graduate.  I found classes to be even more challenging because of my learning disability.

Overall I found “Atypical” to be relatable, and appreciated the fact that Netflix made a show where two of its characters have learning disabilities.