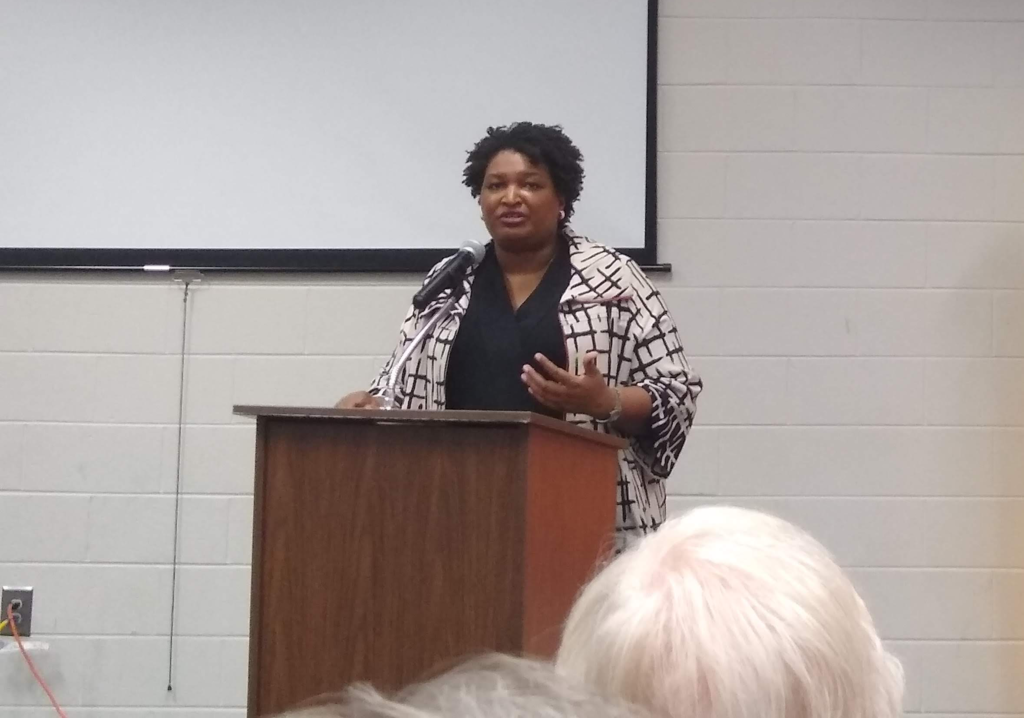 On Tuesday, Sept. 17, former Georgia
gubernatorial candidate Stacy Abrams addressed a larger than expected crowd at
Ruby Fulbright Aquatic Center in Clarkesville on behalf of Fair Fight 2020, a
voting rights group she started in the wake of the 2018 election with the goal
of ending voter suppression in Georgia and nationwide.

Abrams recently revealed plans to expand Fair Fight 2020 across 20 states and to establish “voter protection groups” in each to work with local officials and experts. In this way, the multi-million dollar nonprofit hopes to orchestrate a concerted effort to rectify systemic faults in the electoral process. ”You have a perfect storm of increased enthusiasm and increased participation – but also incompetence, under-training and people who are simply confused about what the rules are,” Abrams told the AJC after unveiling the plan last month. 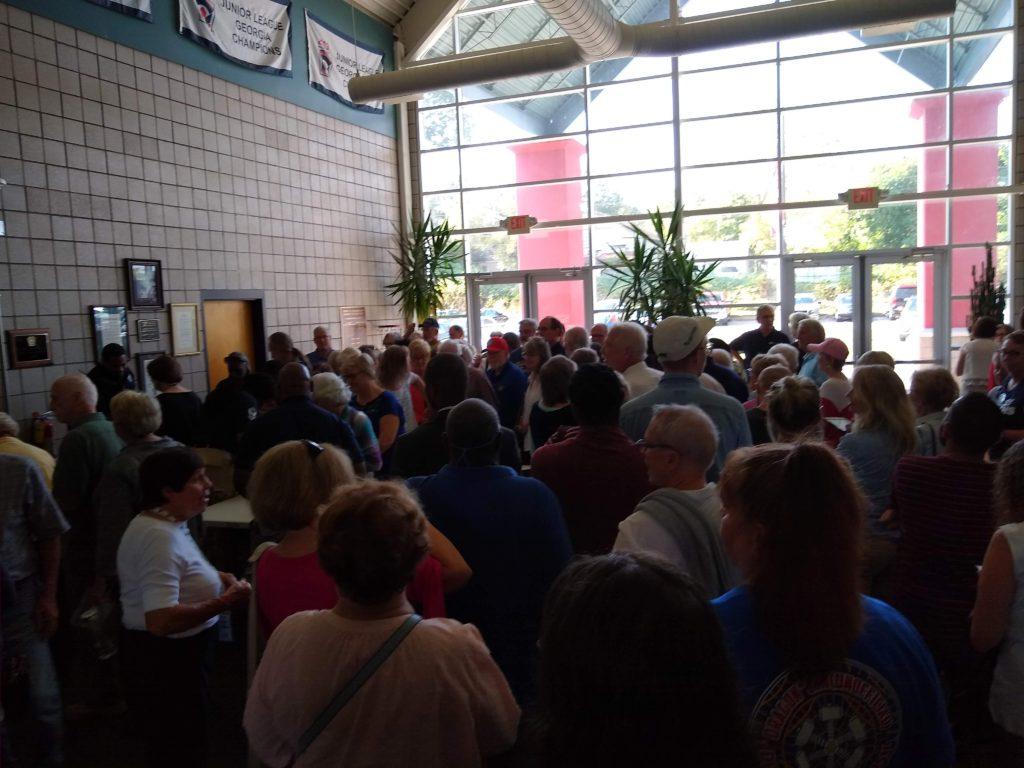 There was a large turnout for Abrams’ visit to the Ruby Fulbright Aquatic Center in Clarkesville on Tuesday, Sept. 17th. PHOTO / Page Dukes

Tuesday’s event, hosted by the Ninth District Democrats, quickly filled to capacity at 120 people, but at least that many more waited in the lobby, hoping to hear the Democratic leader speak. They were not disappointed. Abrams delivered a short speech outside the doors to the reserved room, which had been closed at 4:58 p.m. and blocked by security officers seeming to bolster them against the burgeoning crowd.

A handful of red-clad protesters assembled near
the entrance holding Trump-Pence campaign signs and handmade posters which read
“Legal Votes GA,” “Don’t mess with my legal vote,” and “Legal votes are fair
votes,” although it is unclear whether these were intended to counter Abrams’
message or reinforce it. When Abrams prepared to speak, the small group began
to protest, baiting the larger crowd to bark back. But Abrams quelled the
dissent, imploring the crowd to “ignore the noise.”

“She handled it with decorum,” Sarah Shearhouse
of Clarkesville said. “She said, ‘We care about everybody, and we can’t hear
noise in here,’ and they hushed. It was terrific.”

Andrew Marineau and Joel Simon, two Clarkesville
business owners and longtime friends and neighbors, were there representing
opposite ideologies. Marineau said he was there simply to support the Republican
party.

“I’m totally against Abrams,” he said.

“I think she’s wonderful,” Simon said. “Andy and
I are good friends who don’t share the same philosophy,” Simon said. “We just
can’t talk about politics.”

Meanwhile, inside the reserved space, Fair Fight 2020 Organizing Director Hillary Holley briefed the crowd on the ongoing litigation against the state of Georgia, originally filed in November 2018, which seeks to overturn the exact match law (often striking from voting rolls those names which contain hyphens and other special characters) and others which contributed to tens of thousands of uncounted votes in the 2018 gubernatorial election. The suit is the fourth federal lawsuit filed in Georgia in recent years citing concerns over the voting system’s security flaws.

Abrams said after the hard work she and her
campaign had done to get Georgians out to vote, she was willing to concede the
results of the election, but she was not willing to concede the effectiveness
of the state’s election process. For that reason, she said, she refers to it
instead as a “nonconcession.”

“In the tradition of politics my responsibility
on Nov. 16 was to stand there and say ‘Congratulations, job well done, see you
next time,’” Abrams said. “But I’m not really good at tradition. I was raised
in Mississippi the daughter of not one but two civil rights activists,
including a father who went to jail as a teenager registering black people in
his hometown, helping them to get access to a right he wouldn’t be entitled to
for five more years. My mother would make sure we went voting with her on
election day… to see her exercise her rights. My parents talked about
politics but more importantly… showed us what policy looks like. That it’s not
enough to say you believed in something, you’ve got to show it.” 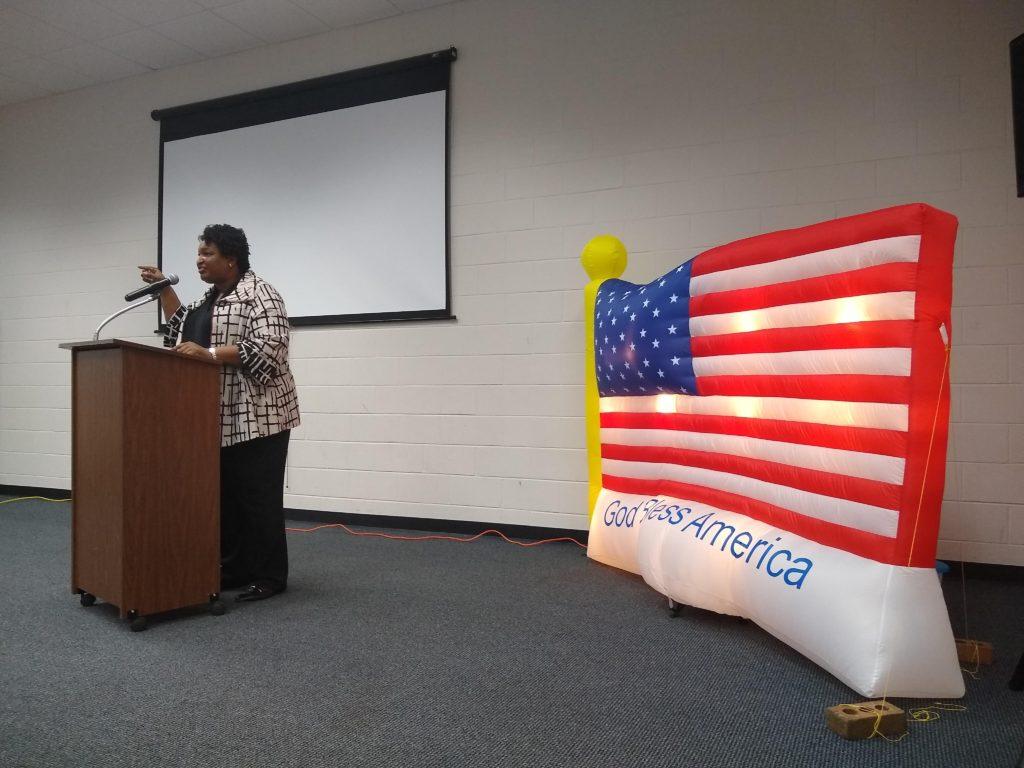 Abrams spoke to the crowd on a number of topics, with an inflatable American flag behind her. PHOTO / Page Dukes

For the Habersham County residents gathered, Abrams evoked the memory of the county’s own problems during last year’s governor’s race.

“Dan and I agree about almost nothing but we
both agree that voter suppression is real,” Abrams said, referring to former
State Rep. Dan Gasaway, who filed a lawsuit of his own last June after voters
in his district were redirected to polling places where their votes would not
count. “When you break the machinery of democracy, it doesn’t just take out
those you aim at, it takes out everyone who needs that democracy to work.”

Abrams said in the period after the election,
she took a mourning period similar to the Jewish custom of sitting Shiva.

“Not winning an election is not the equivalent
of losing a loved one, but it’s an important measure. Because during that time
I was mourning the challenges that I encouraged people to stand up and face
knowing that the person who was going to take that seat did not believe in
their possibility. I was mourning the fact that we had achieved something
remarkable in Georgia. That we had turned people into activists for their own
cause. That people who’d never seen themselves as volunteers, as canvassers, as
phone bankers, as voters, believed that they were and believed it could work.
And… the possibility that they would give up and go home and never show up
again because that’s one of the goals of voter suppression. Not simply to strip
you of your rights but to convince you they were never real to begin with.”

So, Abrams said, she searched for what her next
steps would be, and found them in Fair Fight 2020 and also Fair Count 2020,
which aims to make sure every American is counted in next year’s Census.

“The mission is not about winning the election
as a candidate,” Abrams said. “The numbers told us a different story about what
happened on Nov 6. We tripled Latino turnout in the state of Georgia. We
tripled Asian Pacific Islander turnout in the state of Georgia. We increased
youth participation rates– young people aren’t supposed to vote but we
increased their participation by 139%. We were told that all the black folks in
Georgia who planned to vote had done so for Obama and they were done… But
because we reached out to African American communities, because we did the
work, 1.2 million black people voted for me on Nov 6.”

Fair Fight 2020 has also launched Fair Fight U, with chapters on over 20 college campuses across the state. Piedmont students interested in getting involved in the fight against voter suppression can email Organizer Kia Sims at [email protected]