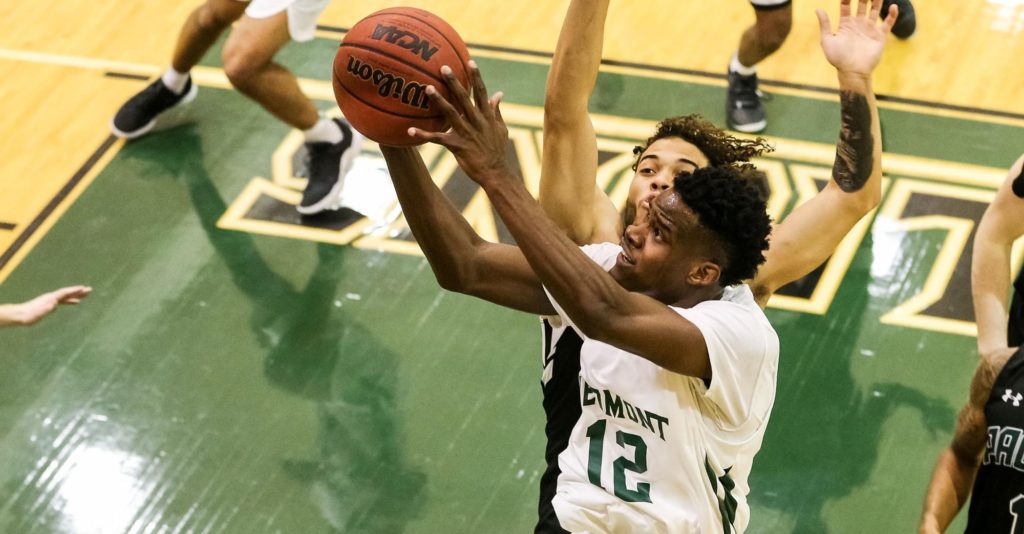 Lanier drives into the paint for a tough layup against William Peace. PHOTO / KARL L. MOORE

The Piedmont College men’s basketball team began the season on the road in a non-counting match at Mercer University in early November. With a tough loss against the Division l team, the Lions fought on against Emory University in their season home opener, losing 98-80. Before the start of 2019, the Lions held an 0-11 record.

With a rough beginning to the new year losing three consecutive games, the men’s basketball team redeemed themselves the weekend of Jan. 11 with back-to-back wins at Piedmont’s own Cave Arena. The Lions earned a 73-54 win over William Peace, with Justin Quick and Taylor Mills scoring 13 points each. The Lions have never lost to the Pacers inside Cave Arena with a 5-1 overall record against William Peace.

Piedmont had a quick turnaround and was back in action the next day hosting Pfeiffer University. Senior Marquise Lanier guided the Piedmont College men’s basketball team to an 82-78 victory over Pfeiffer, scoring a career-high of 32 points. Piedmont led at the half, 40-34, shooting 48 percent from the floor compared to the Falcons’ 28%. In the second half, with 12 seconds left to play, Tariq Abdulgader banked the second of his two free throws to give Piedmont an 80-76 lead.

However, Abdulgader’s career-high of 13 points wasn’t enough for Piedmont to pull through against the Maryville Scots on Jan. 15. Abdulgader accounted for seven of Piedmont’s first 16 points while Taylor Mills led the Lions, scoring 16 points, including five three-pointers. Unfortunately, the Scots held Piedmont scoreless in the final 2:22 of the game after a Taylor Mills trey. The game was all tied up at 63 apiece with 4:55 left, but Maryville finished the game on a 15-3 run and left Cave Arena with a 78-66 victory.

Traveling to Montgomery, Alabama, to face the Huntington Hawks, the Piedmont College Lions dropped an 82-66 game on Saturday, Jan. 19. Huntington built a 20-point advantage at the start of the game, heading into the second half with a 43-25 lead. Piedmont outscored the Hawks in the second half, but it was not enough as the Hawks did enough down the stretch to secure a win.

The Lions’ overall record for the season so far is 2-15, being 2-9 in conference play. The men’s basketball team has eight games left in their season, with all but two being home games held in Piedmont’s own Cave Arena. The Lions will play at home next on Saturday, Jan. 26 at 2 p.m. against Berea.