The Spirit of Piedmont: A look back through the student life at Piedmont

It seems that every group of students take on an “issue” that they want to change about their school.

Recently, Piedmont has seen the discussion of visitation hours being extended, or the concept of having to visit someone in set hours abolished altogether.

In the 1930s, students had a different social issue to change: dancing.

For the first part of Piedmont’s history, social dancing between men and women was not fostered by the college.

When groups of students began calling for school dances, the idea was opposed by the administration, the board of trustees and most of the faculty except for the dean of women, Margaret Taylor.

The students went to Taylor for advice on a petition, a scene described by Wendell Brooks Phillips in his article “I Teach in a Hick College” which was published in the Atlantic Monthly.

“The new dean of women not only favored the proposed petition, but suggested that the seniors approach the ‘paper’ trustees and attempt to rouse them from their long seclusion on the front page of the [college] catalogue.

“Acting upon her advice and armed with several favorable replies from the northern trustees, some of whom expressed surprise that properly supervised dancing was not a regular part of college life, the seniors took the letters to the local trustees, … Supposing, of course, that they would honor a majority vote of their own board.

“But little did they understand the working of the trustee mind. Not only was the petition denied, but the seniors were severely reprimanded for the insubordination, and the dean of women [Taylor] was promptly informed of her dismissal,” said Phillips.

Despite this setback, the students still fought the issue. The student paper sent out a questionnaire that showed 77 percent of the students were in favor of dancing, whereas the trustees and faculty disapproved.

Three years later the issue was taken up again by the college newspaper. “One more victory for advocates of dancing: 114 voted approval, 14 against, 25 undecided. How can the board (Lord knows which one – we’ve been put off by so many) refuse a concurrent student opinion such as this?” said the Piedmont Owl in January 1939.

Finally, trustee and faculty resistance was worn down by the students, and dances were authorized for the spring quarter in 1939.

The college newspaper reported this authorization shortly after the decision was made.

“We feel that dancing has meant a great deal to the college this quarter. School spirit and pride is higher for the time of the year than ever before.

“Because the dances have been conducted in such an outstandingly dignified way, Piedmont is winning a name in this section of Georgia and throughout the state for providing wholesome, gainful recreation for its students and campus guests.

“Now that Piedmont has dancing, it gives to the student all the things a larger school does and more.” 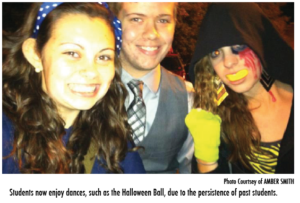