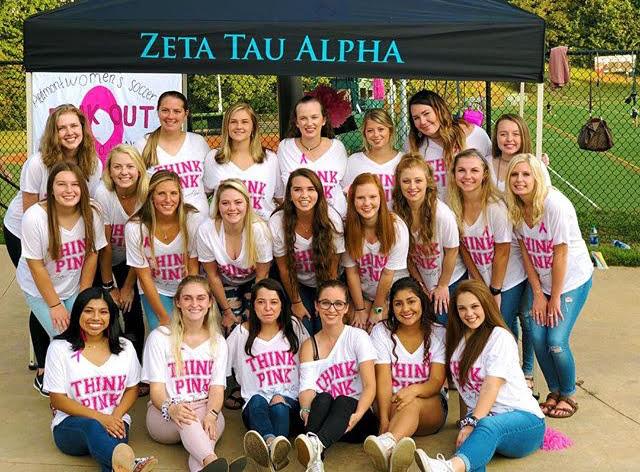 When the announcement that Zeta Tau Alpha would be arriving on campus reached the students last year, the women of Piedmont College were divided. While some were excited at the prospect of a sisterhood, others were apprehensive about negative stereotypes. Zeta Tau Alpha’s arrival came without major damaging bumps in the road, much to the delight of the sisters who brought the sorority here.

Abby Carberry and Kenzie Johnson are two leadership consultants for ZTA. They work alongside the members as on-campus mentors. Before they landed on Piedmont’s campus, they recognized that the students weren’t initially all for the arrival of Greek life, but given some time and a little education, they saw the women warm up to ZTA.

“We feel as though the community was a bit hesitant at first,” Carberry and Johnson said in a joint statement. “But after learning more about the foundation of Greek life and what it has to offer, we have seen a strong growth in interest. Even those who are not directly involved have expressed support and interest in our philanthropy and what we stand for, allowing us to partner with the Piedmont College community.”

Carberry and Johnson said they aim for a broader sense of community on campus, not just between the sisters.

“Zeta Tau Alpha has been offering sisterhood to the women of our organization for 120 years,” Carberry and Johnson said. “But we do not only benefit our members. Zeta takes pride in having a strong presence on all of our collegiate campuses and works towards bettering the local community and impacting the lives of those around us. Our chapter members have made several commitments already with our involvement with the women’s soccer team ‘Pink Out’ event, campus clean up efforts and volunteering at the local food bank.”

The “Pink Out” game, an event in which ZTA partnered with the women’s soccer team to spread awareness about breast cancer education, was held on Oct. 1st, the first day of breast cancer awareness month. Alyssa Emmett, a junior mass communications major who is currently a member of ZTA, attended the game alongside her sorority sisters.

“It was wonderful,” Emmett said. “The Pink Out was our first official event and we raised over $200 that night compared to 100 last year.”

Emmett said she did walk into ZTA with some preconceived notions about Greek life that were common among the women at Piedmont. After talking to leadership consultants like Carberry and Johnson, however, she realized that Greek life had a place in her life.

“I believe everyone has their opinions of Greek life that are good or bad,” Emmett said. “I always saw the bad side, but after talking to the girls before I joined, I knew this was something I wanted to be a part of. I joined so I could have a positive impact on Piedmont by being a founding member. I can be apart of something that will make Piedmont a better college than it already is.”

Zeta leadership consultants Carberry and Johnson stated that they recognize that the cost of becoming a ZTA sister is not exactly the easiest on college students’ bank accounts. They said they hope to provide more cost-effective ways to join the sisterhood, however they did not specify how they plan to do this.

“Finances definitely play a factor when it comes to deciding whether or not Greek life is for you,” Carberry and Johnson said. “We have overcome a few financial concerns with current members already and will continue to be proactive in helping women with financial concerns who want to be part of our new ZTA chapter at Piedmont.”

As the first official sorority featured at Piedmont, Zeta Tau Alpha has gotten many students on campus involved with their breast cancer awareness promotion, which ZTA designed to provide women with a strong sense of unity and empowerment. Although not all of the women at Piedmont have interest, or have been financially able, to officially become a sister, Carberry and Johnson have high hopes for ZTA’s road ahead.

“We were thrilled to come to the Piedmont campus,” Carberry and Johnson said. “Especially considering we were given the opportunity to be the first National Panhellenic Conference women’s group on campus. We want to create an organization here at Piedmont where women can be involved, feel empowered, and contribute to the community around them. We are so excited and looking forward to working with other organizations at Piedmont College while creating a positive atmosphere in regards to Greek life as a whole.”