ZETA: The Cost of Sisterhood 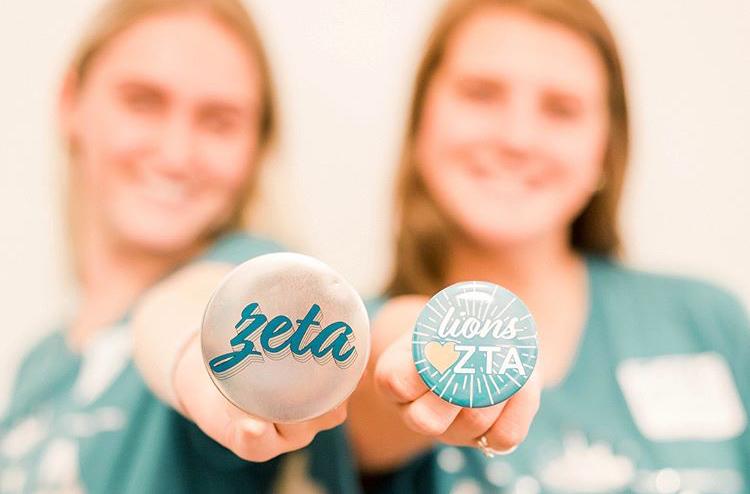 The mythology that surrounds sororities is fascinatingly complex. What was initially organized to foster a sense of love, friendship and “sisterhood,” has been stereotyped into an exclusionary group of women who care about nothing more than partying. Zeta Tau Alpha, the sorority that has recently arrived on Piedmont soil, has had a debut filled with high and low points, according to students who were interested in joining the sisterhood.

Zeta Tau Alpha was originally founded on Oct. 15, 1898 in Virginia and currently has more than 257,000 initiated members across 171 active collegiate chapters, according to their website. When one new Zeta member, junior history major Taylor Jenkins, heard that Zeta would be coming to Piedmont, she was excited but apprehensive. Piedmont is known for being a close-knit, small private college in the mountains, and Jenkins said the idea of Greek life there didn’t originally make sense. However, her excitement at the prospect of becoming a sorority sister pushed the doubt from her mind.

“Piedmont didn’t seem like the place for a sorority,” Jenkins said.  “But I think every girly girl wants to be in a sorority, and that was definitely me; watching them in movies I knew I wanted to be in that. When Zeta started coming, it was so exciting.”

Jenkins said she felt anxious knowing that not every girl who was interested would make the final cut. However, she met all the requirements and was inducted into the sorority, and has since meshed well with the other girls.

“I was super nervous at first because I knew not all the girls would get in,” Jenkins said.  “I didn’t know if I’d make the cut, because I didn’t know what they were looking for. But I was super excited because I was given the opportunity to join. I didn’t think I would fit in at first, but all the girls are so nice and all the activities we do are so bonding. We’re all different girls and we all have different things to offer, but together we’re like a team and it’s nice to be like one family.”

Not all girls were given the same opportunity to join the Zeta family, however. When Zeta Tau Alpha began recruiting at Piedmont, junior art major Samantha Catoggio’s interest was piqued. Sororities for her are a family affair, and she wanted the opportunity to better her community and get to know like-minded women.

“My sister at Alabama State is in a sorority,” Catoggio said. “So was my stepmother. I thought maybe it would be interesting to join one as well. I’d get more opportunities to help in the community and maybe even make new friends.”

Catoggio knew of the negative connotations associated with sororities. However, she pushed those out of her mind and dipped a toe in the river of Zeta Tau Alpha.

“There are stereotypes linked with sororities that don’t reflect them well,” Catoggio said. “For example, that the girls involved are very stuck up. That can be true, but the majority of the time it’s not. So, I decided to give it the benefit of the doubt, test the waters and dispel the stereotypes for myself.”

After attending the open house and being scheduled for a one on one interview, Catoggio said she was disheartened to learn in a text message that she had been denied from Zeta Tau Alpha. The unstated reason behind her denial? The cost of joining the sisterhood was simply too high.

According to the handout given to the women by the interviewers, the total cost of joining Zeta Tau Alpha comes out to $873, split into a fall semester payment of $534 and a spring payment of $339. The fall semester includes two one time fees, new member and initiation fees, that total to $195, while both semesters include both miscellaneous and chapter fees that make up the rest of the total cost. With an installment plan payment of $178 due only a week after the interview and a Zeta pin that started at $68 due for purchase before initiation, Catoggio realized that the price of sisterhood didn’t fit her budget.

“The fees weren’t hidden,” Catoggio said. “You knew there were going to be fees, but it was never said until the interview how much those fees would be. We were assured that the fees were high because they were just starting. It caught me by surprise, and I had to mention that even the installment payments were more than my paycheck, so it pretty much became an impossibility to join.”

Catoggio said after she told the interviewer this, she was politely shown the door at the end of the interview.

“She was still very cordial and inviting, but you could tell the interest in me declined,” Catoggio said. “I was no longer something they could reel in.”

Both women agree that being a Zeta Tau Alpha founding sister reflects well on a resume. Junior music major Jordan Approbato also cited this as a primary reason for her interest but agreed with Jenkins’ original impression that Piedmont wasn’t quite ready for Greek life.

“I thought it wouldn’t work and part of me still thinks it won’t work,” Approbato said. “I don’t want to say we’re too small, but there’s not enough diversity for them to make a real impact for everyone.”

Despite her original apprehension, Approbato shared Catoggio’s desire to dispel stereotypes and see things through her own lens. However, once she saw for herself how the visiting sisters handled the scouting process, the stereotypes seemed to prove truthful.

“They would never approach me directly, I always went up to them,” Approbato said. “It seemed blatantly obvious that they went for a certain type of girl. I don’t want to say the white, blonde or brunette girl, but the only time they would approach me is when I was with my friend that fits what kind of girl they’re looking for.”

After chatting about the sorority’s good deeds in her interview, Approbato was hit with the price tag. The total cost of entry surprised Approbato, who didn’t expect the cost would be so high.

“It starts out very chill and they’re nice, and they talk about all of the good things they do like the strawberry picking and their history,” Approbato said. “It’s no secret that Greek life is expensive, but I didn’t realize how steep it was. You could see that look of, ‘Maybe you should reconsider.’”

Approbato said she too was cordially shown the door. The difference between her and Catoggio’s denial? She didn’t receive any form of notice that she had been denied.

“With the prices, I didn’t expect that it wouldn’t be flexible to work with people who didn’t have that money on hand,” Approbato said. “Their response to that was ‘Well, there’s more expensive Greek lives out there.’ It’s like they said, ‘We’ll give you this tall promise if you pay this tall order.’ They told me that they’d send a text message saying if you got accepted or rejected. I never got a text. So, who knows, maybe I got accepted and I didn’t even know! Probably not, because they never reached out to me again.”

For any organization starting up and trying to gain footing in a new area, there are going to be bumps on the path to laying down a good foundation. Zeta Tau Alpha has found success at other colleges, and in their short time here, they’ve made a relatively smooth landing onto Piedmont’s campus. For some students, however, it seems that rather than “Seeking the noblest,” as their motto claims, they would rather seek the financially privileged.