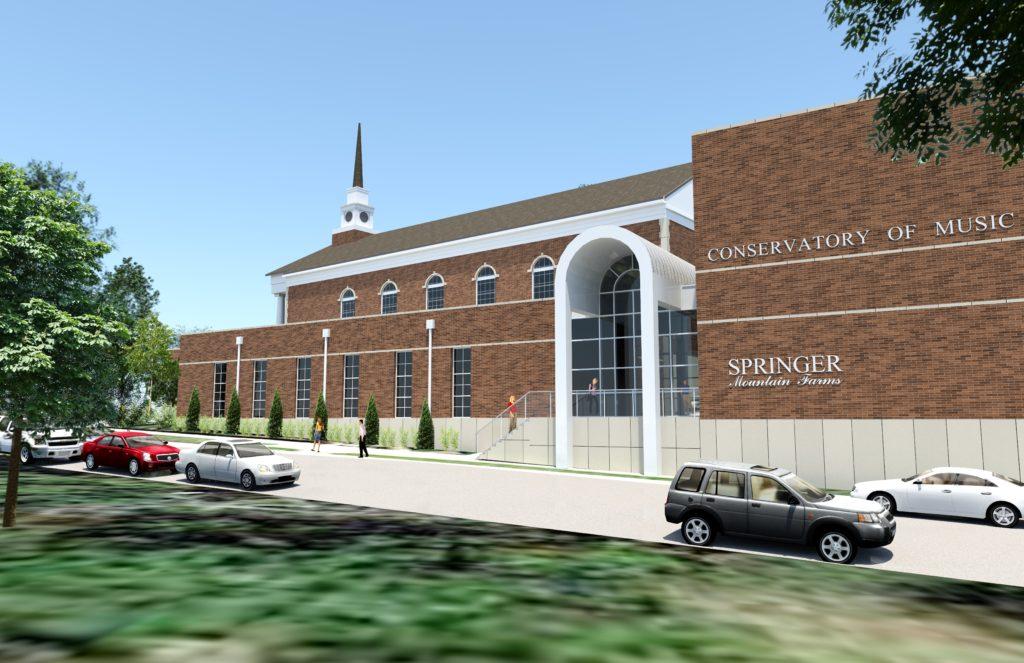 A mockup of the new Conservatory of Music shows the building standing tall beside the park. PHOTO / PIEDMONT COLLEGE

Piedmont College’s music department building, located near the academic building Daniel Hall on the Demorest campus, will begin a series of major renovations in early October that will continue throughout the current academic year.

“The first phase of construction for the Conservatory of Music will begin in early October with the demolition of Brooks Hall and the former music classroom wing due to structural issues,” Dr. Mellichamp, Piedmont president and music professor said. “In November, construction of a larger wing will begin. The project will also include a complete renovation of the lower level of the existing College Chapel.”

Opinions on the relocation have varied between the music students. Jordan Approbato, a junior music education major, realizes that while Nielsen may not be where the music department belongs, it’s more than manageable for the time being.

“Although being in Nielsen isn’t ideal, it works,” Approbato said. “It’s just one year. The motto we’re going with is patience and flexibility. It actually works pretty well for what we need.”

Dr. Hinson, the chair of the music department, had only positive things to say about the final product that the lengthy renovations will produce.

“I am very excited about the new facilities, which will cap off a roughly 10-year program of providing state-of-the-art instructional, performance and museum spaces for the fine arts,” Hinson said. “The new Conservatory will not only provide the much-needed classroom, rehearsal, and studio space we need for our students, it will also be a showplace that will attract prospective students and audiences to our campus.”

The renovations will cost $8 million and all of the funds were raised from donations to the school. Dr. Mellichamp went into detail about the new additions the renovated building will feature.

“The facility will include eight student practice rooms, a student lounge, music library and conference room, music offices, music technology lab, a teaching suite of eight studios for faculty, a grand entrance foyer, and a concert hall with adjustable acoustics,” Mellichamp said. “One of the most special features is that the Conservatory will be an all-Steinway school, one of very few in Georgia, with the acquisition of 22 new Steinway pianos.”

According to the Steinway website, there are a total of seven universities, excluding Piedmont, in Georgia that are considered ‘Steinway schools,’ including the University of Georgia. Steinway is considered a prestigious brand of pianos, which is an exciting prospect for Approbato.

The renovations are projected to reach completion in time for the next academic year, at which point the building will be back in action for the music students. Approbato has maintained a positive attitude while beginning to endure the long wait and knows that she’ll be singing a lighter, happier tune come her senior year.

“I’m excited for the new department,” Approbato said. “So being here, in Nielsen, in the end will be worth it.”