The Lions bats started off cold, going hitless until the bottom of the third inning when Michael Barnes led of the inning with a single.

Barnes would later score on a sacrifice fly by Casey Perham, cutting the Generals’ lead to 4-1.

In the fourth inning, the game began to turn in the Lions favor.

Kevin D’Antignac began the inning with a solo blast over the left field wall that would provide the Piedmont offense with a spark.

The Lions would tack on three more runs that inning to take a 5-4 lead.

“My goal that inning was to simply get on base any way that I could. Luckily I hit a home run and it seemed to swing the momentum in our direction, which is huge in baseball,” said D’Antignac.

Washington and Lee would counter in their next frame, picking up one run to tie the game at five a piece.

In the bottom half of the frame, the Lions answered right back, pushing two more runs across the plate with RBIs by Austin Brick and Tate Koons.

Piedmont tacked a final insurance run on in the bottom of the seventh, making the final score 8-5.

Allan Tokarz claimed the victory for the Lions, coming in the second inning and allowing only five hits and one run in 4.1 innings of work.

“It feels great. To come out of the bullpen and help the team get back in the game is great,” said Tokarz.

Closer Jake Brewster picked up his second save of the season, pitching a perfect ninth inning. The Lions’ bullpen has given up only one earned run in 33.1 innings of work so far this season.

The non-conference victory moved the Lions to 4-5 overall on the season, and they went into a three-game home stand against rival and USA South foe Maryville College this past weekend.

“The four-game losing streak really opened our eyes to some things that we were not doing as a team very well,” said D’ Antignac.

“After our off day that next Monday, we decided to recommit to what we have been taught and most importantly to have fun and play as a team,” said D’Antignac.

“Our win against Washington and Lee was a great first step and I think we will be ready to show Maryville and our conference what we are capable of.”

Piedmont’s season record is 6-6 overall and 4-2 in the USA South Conference.

The Lions face Oglethorpe University on Feb. 26 in Atlanta, and then return to Demorest to play a three-game series against NC Wesleyan College. 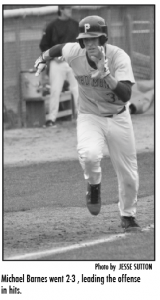