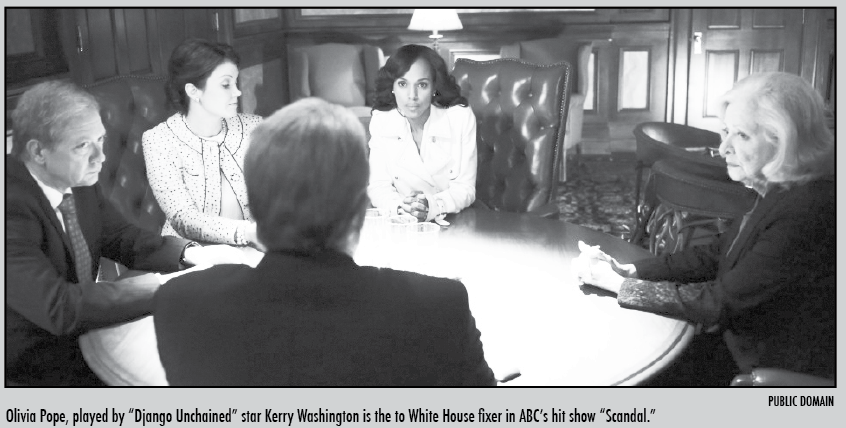 “Scandal” is a fast-paced show about a team of legal gladiators helping protect upper-class citizens.

As a former White House Communications Director, Olivia Pope is now the head of her own legal firm, as well as five other tough staff members from dramatic walks of life.

This team of legal gladiators is set to operate in a very professional way.

Everyone in Olivia Pope and Associates is always ten steps ahead of whatever situation they face.

When it comes time to investigate a case, everyone gets right to work.

No one wastes any time asking the tough questions, finding out exactly what they need from their client or anyone else involved.

“Scandal” tends to cover a web of information during each episode.

If you enjoy connecting the dots between a variety of different characters, “Scandal” will bring you just that.

Even in season one, there’s a lot of background information that sheds a whole new light on the characters.

When a new employee for the law firm gets too emotionally involved in a case, she’s told never to cry because Olivia Pope doesn’t cry.

Later on in the season when Olivia is caught crying, we see that there’s still a human side to her.

She’s really intimidating and professional when she wants to be, but sometimes she needs a break.

For me, the show started strong, but as season one progressed, it slowed down a little.

I understand that season one is going to be more focused on character development, but I expect later seasons of “Scandal” to only increase in quality.

“Scandal” is creator Shonda Rhimes’s (Grey’s Anatomy, Private Practice) latest contribution to television, and it is marvelously crazy.  Most of the characters, including the President of the United States, are driven by their basest desires.  That means just about anything can happen, and it does.

The show centers on “fixer” Olivia Pope (Kerry Washington) and her employees.  As the title implies, they help Washington’s elite dig themselves out from under scandal.  However, Olivia and her crew also have plenty of skeletons in their own closets.  This season (the second) has focused primarily on those skeletons.

The plots move extremely fast.  For instance, there was an assassination attempt on the president, something that would usually be an end-of-the-season cliffhanger.  This took place early this season, and the mystery was solved just a few episodes later.

However, just because the mystery was solved, that doesn’t mean that “justice” was served.  Viewers might become frustrated at the lack of consequences for the power elite.

Typical of Rhimes’s shows, there is a very diverse cast.  What makes the show different from her other workplace dramas is that what happens in this workplace could affect the entire country.

Most of the plots are ripped from the headlines, like in the Law and Order shows.  Leaders have affairs; terrorists plot; elections are rigged.

I hope that the real movers and shakers of Washington use more superego and less id, but part of the fun of television is watching people get away with stuff you would never try.

Suspend disbelief and enjoy the ride.