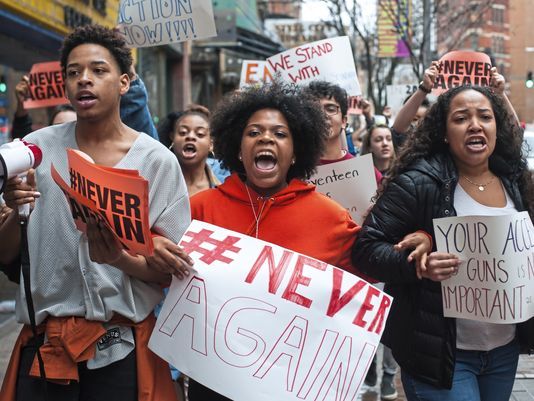 At some point between April 20, 1999, when two gunmen murdered 13 people and injured 13 more at Columbine High School, and on Feb. 14, 2018 when the most recent school shooter killed 17 people at Stoneman Douglas High School in Parkland, Florida, the American public has become numb to the headlines. For some educators, the sharp increase in gun violence over the past 19 years has created a false sense of calm when it comes to the impact these tragedies have on their lives.

“My spouse and I were talking the night of the Parkland shooting, and we realized it does not scare us to think about that happening in our schools,” one Gwinnett County educator said. “We know it is an ever-growing reality that one of us will run into the line of fire to save a student’s life one day, and we have accepted it as part of our job as educators. The fact that I am calm saying that scares me.”

There are many opinions on what should be done to prevent another mass casualty shooting from taking place in American schools.

“I prefer to send my energy to the survivors and the people who are grieving,” Dr. Lauren Ringwall, Coordinator of Music Education and former public school teacher said. “There is time to talk about solutions later.”

For some, the answer is arming teachers and administrators or other specified school personnel. This solution is proposed for the safety of students and staff in the event a shooter opens fire on campus. In the Claude Independent School District in West Texas, teachers already carry weapons on campus. Those teachers are required to practice at a shooting range once a month. They also train with the Armstrong County Sheriff’s Office and the Department of Public Safety. Signs posted in the front of the school and around campus state:

“ATTENTION: Please be aware that the staff at Claude ISD is armed and may use whatever force necessary to protect our students.”

Some parents and students said it brings them peace of mind to know that if a shooting occurs, someone will be on hand who is trained to take care of the situation. Others view this as a reactive approach instead of a proactive tactic to make sure Stoneman Douglas is the last mass shooting the United States sees.

“The current policy of gun-free school zones actually invites these kinds of attacks,” Republican Congressman Patrick Neville from Colorado told “Fox and Friends.” “It is not a realistic policy and it sends the message that our students are soft targets. So, I want to end gun-free zones and actually allow good people to defend our students.”

But many teachers say they feel that is not their responsibility.

“A teacher’s primary responsibility in their job is to teach children academic content and character,” a Muskogee County English teacher said. “Teachers are more stressed now than ever as demands pile on with less and less support. Do we really want to put a gun in the hands of people constantly in a high-stress environment?”

These feelings were echoed by Dr. Katrina Graham Short, who the Middle Grades Department Chairperson in the School of Education at Piedmont College.

“In the 27 years I have taught, I have never taught in a classroom, or had a school office, in which I had any storage space that locked,” Dr. Short said. “I take measures not to carry anything with me that might entice someone to steal it and carrying a gun would only add to that burden.  No, teachers should not be armed.  Our legislators, and our schools, need to address school violence with more guidance counselors and school psychologists, and school properties that are not so spread out that controlling who gains entrance is impossible.”

Others blame mental illness given the pattern that has arisen, not just in school shootings but also in all mass casualty shootings over the last twenty years where in the only link seems to be a diagnosed mental illness. Excessive Aggression is defined in Clinical Management of Behavioral Disorders in Children as a child whose “aim is to destroy, overcome, or master an object or situation. It may be expressed through acts, or when the acts are inhibited, through words or thoughts. The impulse is associated with feelings of pain and unpleasant tension, as in hatred, anger, jealousy enmity, attack, defiance, disobedience, and irritability; or with feelings of superiority, as in negativism, belittling, contradiction, destructiveness, scorn, threatening, mastering, and overpowering. Sometimes the expression of aggressiveness is accompanied by pleasurable feelings, as in sarcasm, persecution, teasing, and cruelty.”

School officials and/or students in shootings that involved current or former members of the student body reported all these markers. The FBI was criticized after the shooting in Parkland for not stopping the perpetrator when they had been forewarned that he was a prime candidate for just such an act of violence.

Parents are worried about their own children’s emotional well-being surrounding the growing number of school shootings, as well as their physical safety.

“My sweet, happy-go-lucky, 7-year-old baby girl heard from an older boy that ‘some high schoolers had gotten shot and some teachers died,’” one teacher-parent said. “She thought he meant the school I teach at. She thought for a whole hour that I had died and now she is afraid of going to school. That is unacceptable. As a parent that breaks my heart, and as a human it disgusts me that we live in a world where a child knows that other kids did not come home from school that day.”

A third often-cited solution is to place regulations on the guns being used in the massacres.

“I learned to fire a rifle as a teenager in a gun safety class, and my father and much of my extended family hunted,” secondary education professor Dr. Teresa Secules said. “When someone got a deer, we ate better that winter. As far as I am concerned, there are two legitimate reasons to own a gun: for hunting and for self-defense. No one needs an AR-15 style semi-automatic rifle for either of those purposes. They should be banned and all other guns should be carefully regulated. Guns are the reason our murder rate is so much higher than all the other developed countries in the world and we have a mass shooting rate that is skyrocketing.”

The students that survived at Stoneman Douglas started speaking up to that effect, beginning effectively as soon as they were out of harm’s way. They are planning school walkouts on March 14 and April 20 as well as the March for our Lives event in Washington DC on March 24.

“I think it is amazing that the kids are speaking out,” a Muskogee County English teacher said. “No one listens to teachers now. Maybe they will listen to the kids. After all, they are about to be first-time voters. They are expecting to be impressed and they are expecting their representatives to listen.”

The official March for Our Lives website states the purpose of the march:

“School safety is not a political issue. There cannot be two sides to doing everything in our power to ensure the lives and futures of children who are at risk of dying when they should be learning, playing, and growing.  The mission and focus of March for Our Lives is to demand that a comprehensive and effective bill be immediately brought before Congress to address these gun issues…No special interest group, no political agenda is more critical than timely passage of legislation to effectively address the gun violence issues that are rampant in our country. Every kid in this country now goes to school wondering if this day might be his or her last. We live in fear. It does not have to be this way. Change is coming. And it starts now, inspired by and led by the kids who are our hope for the future. Their young voices will be heard.”

The students face adversity on gun control in Congress.

“Do we allow the children to tell us that we should pass a law that says, ‘No homework?’ Or, ‘You finish high school at the age of 12’ just because they want it so?” State Representative of Florida Elizabeth Porter said before the state Senate passed a bill which proposed raising the age to buy guns, adding mental health provisions, and possibly arming some school staff. “No. The adults make the laws because we have the age. We have the wisdom. And we have the experience to make these laws. We have to make laws with our heads and not with our emotions because emotions will lead us astray. However, our common sense and our rationale will not.”

During the 2016 election cycle, the National Rifle Association spent just over $1 billion on candidates seeking federal office. Congressional candidates from Florida, including Republican Sen. Marco Rubio, received the third-biggest total from the NRA. Only candidates from California and Texas, the nation’s most populous states, received bigger sums.

In fact, the NRA spent $3,303,355 in campaign dollars on Rubio alone, and more than $30 million to help elect Donald Trump. Senate Majority Leader Mitch McConnell received $1.3 million in NRA support. The total NRA donations to GOP campaigns in 2016 add up to a grand total of over $54 million.

On top of the massive spending from bureaucratic organizations, other major individual donors control the sway of policies during election seasons. At least one big-ticket donor, Al Hoffman Jr., has pledged to pull support from politicians who do not actively oppose weapons like the one used in the Parkland and Sandy Hook shootings.

“I will not write a check for anyone who does not propose a ban on assault-style weapons,” Hoffman said. “I have been after so many politicians to adopt legislation and always the answer is, ‘Well, we are working on it, we are working on it.’ And nothing ever changes.”

Many feel that in order to get any restrictive measures placed on assault rifle purchases multiple donors who hold the purse strings for midterm election campaigns will need to take a similar pledge to counteract the support the NRA funnels into the GOP.

“School should not be a war zone,” one high school coach said. “I should not have students come up to me asking if I would jump in front of a madman for them. Heaven is too crowded with the souls of those taken far too soon by people that have come into our schools and taken our safety away from us.”

“Education is not free anymore,” the coach said. “Our children are paying for it with their lives. Still, we do nothing to stop these tragedies from happening again and again. Heaven is far too crowded.”

Editor’s note: Those who teach in the public school system, either contractually or by silent force of their school board, are not allowed to be named in stories that could potentially reflect poorly on their district. For that reason, the teachers quoted asked not to be named in this story.