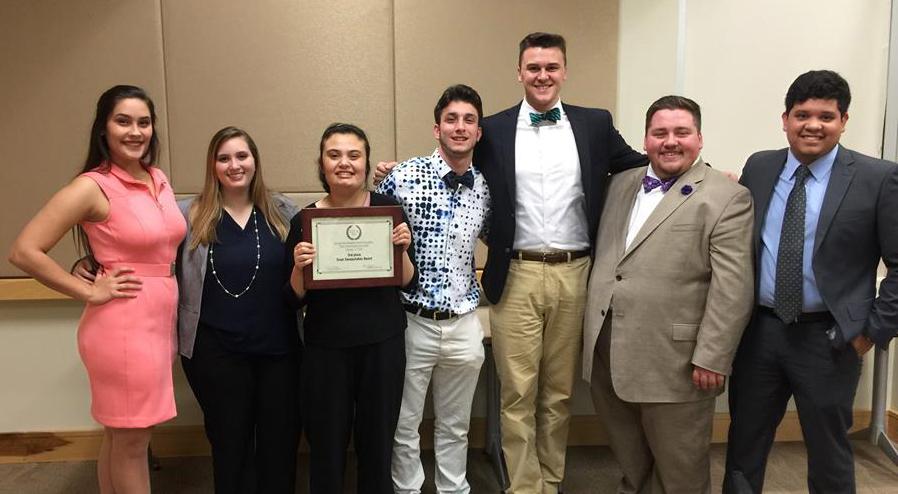 Graduating a year ahead of schedule, Raymundo Hernandez is already applying to law schools across the state. Before he knows it, he’ll be studying for his last set of final exams at Piedmont College. Only this time, he’ll be doing it in the wee hours of the morning at the University of Wisconsin.

Hernandez is the co-president of the Piedmont Debate and Speech Team, which competed at the Georgia Intercollegiate Forensic Association Tournament on Feb. 17. Piedmont left the tournament with several awards, Hernandez taking third place in the extemporaneous speaking category. For this feat, along with his performance in the impromptu category at a competition earlier in the year, Hernandez will be the only contestant to represent the state of Georgia at the National Forensics Association (NFA) National Tournament, held at the University of Wisconsin-Oshkosh from Apr. 18-23.

“This is definitely the biggest accomplishment in speech and debate that I’ve gotten so far,” Hernandez said. “In high school, I did go to the state tournament, which to me at the time was the equivalent of the national tournament that I’m going to be going to now. Getting to state was a great accomplishment for a high schooler, but as of right now this is the highest achievement in speech and debate that I’ve gotten. It’s a blessing, if you will.”

The NFA nationals will be the final bang of Hernandez’s speech and debate career, which started four years ago.

As the co-president of Piedmont’s debate and speech team, Hernandez manages the debate side of the team. Both categories that he will be competing in, however, are speech.

The first category he’ll be competing in, which he finalized for at the Autumn in the Mountains Tournament at Berry College, is impromptu. Impromptu is one of the most difficult categories to compete in and requires the ability to think extremely quickly.

“You go into the room that you’re going to be speaking in and you sit down in front of a turned over piece of paper,” Hernandez said. “The judge gives you five seconds to turn the paper over and read the prompt. Usually it’s a quote, a proverb or even a political cartoon. As soon as those five seconds are up, you have two minutes to put a five-minute speech together. In that time, you have to make your speech as organized as possible, you have to find the right words to give yourself confidence and you have to fill it with enough content, from memory, to make it sound intelligent. Going to nationals for something as difficult as impromptu… I mean, it makes me proud of myself. It’s a pretty great honor.”

Hernandez will also be competing in the extemporaneous category, which is a larger-scale format of speaking, focusing on heavier topics that require more research.

“Extemporaneous is a bit different than impromptu,” Hernandez said. “You get 30 minutes to prepare a five to seven-minute speech, but it’s always a very politically-heavy topic. I’d say that extemporaneous is a bit easier than impromptu, because instead of being given a single proverb or quote to base a speech off of, you’re given three questions to choose from. Sometimes you’ll get lucky and find a topic that you already know quite a lot about. The first topic that I had at the state tournament was, ‘Who is winning the battle over confederate monuments in Georgia?’ This one was pretty easy for me, because I had already done a lot of research on the topic in my own time. The second topic that I had, however, was, “Is U.S. financial disengagement impeding Iraq economic recovery?’ Of the options I had to choose from, this was the one that I knew the most about, which is really saying something.”

Dakota Stockton, co-president of the team, manages the speech side of things. He’s proud of Hernandez’s accomplishments as a leader and is supremely confident in his abilities as a speaker.

“[Hernandez] has played such an integral role, not only as a leader but as a speaker for our team,” Stockton said. “He has put his own life to the side to make sure that we have the best possibility for success. For the last three weeks of practice, he didn’t practice his own speech a single time. I don’t say this to brag on his speaking skills, but his people skills. He didn’t practice because he spent his time helping another team member prepare for her own speech, hoping that his efforts would help place her in the finals of the state tournament, which they did.”

“He helped me by listening to me and working with me on my speech about ending the stigma against mental illnesses,” said Nicole Thomas, a member of the Debate and Speech Team. “Ray as always been very encouraging to all the members of the team.”

While he’s honored and eager to compete at the NFA nationals, Hernandez is also nervous about performing at such a high-stakes competition.

“Going to nationals is a huge honor for me, but it is kind of a double-edged sword,” he said. “Everyone is going to be watching me, and if I do badly, everyone will want to know what happened. I honestly don’t know how I’m going to do, because I’ll be up against the best of the best in the entire country. All I can say is that I’m practicing as much as I can.”

Regardless of how he fairs at the tournament, Hernandez is grateful to have experienced his role on Piedmont’s debate and speech team. As he prepares to leave Piedmont and embark on a new adventure at law school, he’s excited to use his skills as an aspiring lawyer.

“I’ve wanted to be a lawyer since I was 16,” he said. “I’m applying for different law schools in Georgia now. Hopefully after I leave Piedmont, I’ll be doing lots of mock trials. The speech and debate skills that I’ve learned here will definitely help me there, where I’ll be able to apply them to a more realistic courtroom setting.”

Geared with his experience as a debater and speaker, Hernandez is ready to take on the NFA nationals, law school and whatever may come after. Above all, though, he’s ready to have fun.

“I’ve done this so much that at this point it’s just fun for me,” he said. “I really enjoy having conversations with people who are passionate about the things that I am. The experience has genuinely helped me see things from the opposite perspective of my own political identity, and I think it’s made me more open minded. I like arguing, I like finding out different points of view and I really like winning.”