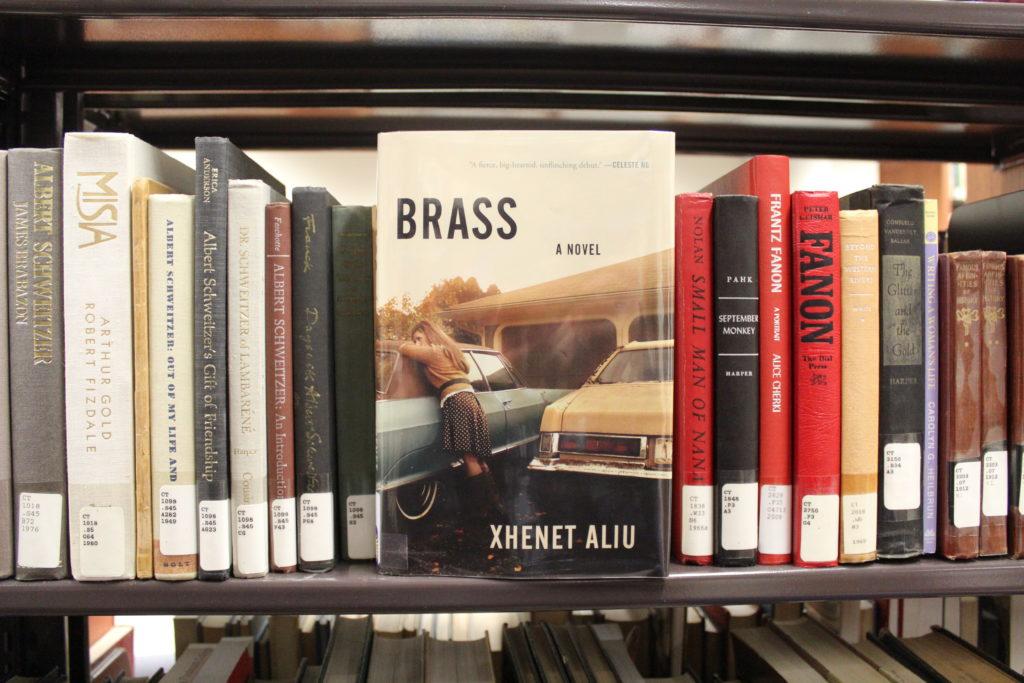 Among Piedmont’s faculty and staff is an array of talented figures, including author Xhenet Aliu, who recently released her second book, “Brass.” Aliu works as Piedmont’s librarian and instructional coordinator for the Athens campus, but has been working on her novel on the side for quite some time.

“There were about ten years between when I first wrote the seeds of the earliest draft to when it actually sold to a publisher, and then it was almost another two years between the sale and the actual publication,” Aliu said. “Granted, there were years in between when I completely shelved this novel and didn’t work on it at all, but I couldn’t get the characters out of my head and really wanted to finish telling their stories, so eventually I’d always return to it. Regardless, it was a very long road; now that I have some practice writing, and re-writing, a novel, I’m hopeful the next one won’t take quite so much time.”

“Brass” focuses on the relationship between a mother and daughter and the stark realities of the American Dream. The story is set in Waterbury, Connecticut, the same town where Aliu grew up, and bears several other similarities to her own life.

“The characters share my hometown and Albanian and Lithuanian backgrounds, but aside from that, they’re completely fictional,” Aliu said. “I set the story in Waterbury with those particular characteristics not because I wanted to write a thinly veiled autobiography but because there were some conflicts inherent with those things that I wanted to explore and exploit: a struggling industrial city in a wealthy state, and the different struggles of recent vs. assimilated immigrants.”

“Brass” has been met with exceptional reviews so far, receiving a noteworthy score of A- from Entertainment Weekly. The novel has also received praise from The New York Times, Barnes & Noble, Huffington Post, Bustle, Elle, Book Riot, Southern Living and Bookish.

While the book has been a sweeping success since its release, the writing process didn’t always come easy for Aliu.

“I’d say my biggest struggle is probably everyone’s biggest struggle, whether they’re pursuing an art or something else that requires a serious commitment: time, or lack of it,” she said. “I worked full-time through the writing of it, and for a year-and-a-half was also in graduate school for library science.”

With such a busy schedule, there were many times that Aliu began to convince herself that she didn’t have time to work on her novel.

“The truth is, you’ll prioritize what’s most important to you,” she said. “And for a long time, I was afraid to prioritize writing because if I failed at it, I thought all the work and sacrifice would have been in vain. I don’t think that’s actually true, because if you’re doing it for the right reasons, the process of writing is more essential than the outcome, but it was sometimes hard to devote so much energy to something where the gains usually aren’t quantifiable. Once I bucked up and made myself a schedule with actual goals—a certain number of words per day, or pages per week—it just became part of my routine, and the excuses just fell away.”

“Brass” is the second book written by Aliu, preceded by her 2013 fiction collection, “Domesticated Wild Things, and Other Stories,” which won the Prairie Schooner Book Prize in 2012.

While her newest book has been a huge success, Aliu doesn’t plan on making any changes in her schedule.

“It was my plan to keep working regardless of whether or not Brass ever became a book,” she said. “I planned to continue working, both because writing literary fiction isn’t generally very lucrative and because I need the stimulation of an interesting work environment so I don’t intellectually atrophy. Working in an academic environment, where inquiry and discovery are at the heart of your job description, is a very nice complement to creative writing.”

While Aliu continues her career at Piedmont College, she’ll also continue following her passion for writing, with multiple works of literature already underway.

“I’m working on another novel set partly in Kosova during the Balkan wars of the 1990s,” Aliu said. “And for the previous few months I’ve been busy writing some essays. The essays started out essentially as homework assignments from my publicist, but it turns out I really enjoyed writing them, and it’s made me interested in pursuing some long-form narrative non-fiction pieces. That said, my heart is in fiction, so I’m excited to turn back to it.”