STUDENTS VOLUNTEER IN HONOR OF MLK 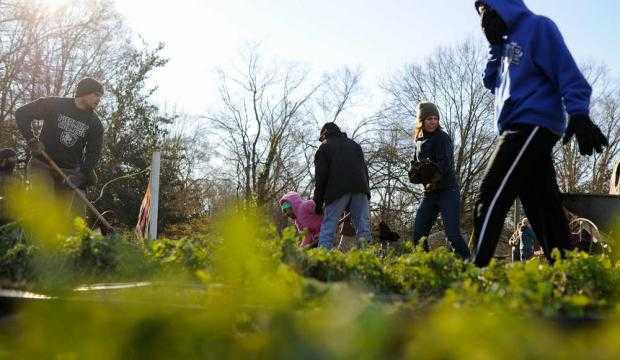 On Monday, Jan. 15, over 1000 volunteers showed up at sites all over Athens-Clarke County for the Athens MLK Day of Service, an annual celebration in honor of Dr. Martin Luther King Jr’s call to service. One such site was the Piedmont College Urban Garden Project, where produce is raised, harvested and donated to feed hungry locals.

Dr. Jane Kidd, Assistant to the President on the Athens Campus, made sure that Piedmont would be an official part of the community celebration this year.

“I applied for us to be a worksite back in November and we were accepted,” Kidd said. “I went and picked up all these tools from Athens-Clarke County and we put it up on our calendar for faculty and students.”

The garden needed some weeding, planning and elbow grease.

“All the beds we had worked on last year, we just left them,” Kidd said. “We got rid of all the dead plants, cleaned the beds and put fertilizer in so we’re ready to plant. We have a recycling water project, so we get water from tubs on the roof of the building. And we put a lot of mulch in the mulching bin, and it really worked out great.”

15 volunteers signed up for the site, and those people brought their friends and neighbors. So many people showed up to volunteer, in fact, that the work was finished in no time.

“We got started at 9:30 a.m. and we were done by 11:30 a.m.,” Kidd said. “We had lots of faculty members come and bring their kids, and there was a person from the Athens Land Trust who was telling everybody what to do. It really worked out great. We had about twenty-something people here.”

Margaret Ryder, Director of the Walker School of Business on the Athens campus brought her two kids and some fertilizer, soil and tools.

“We cleaned it up, made it look nice, did a lot of recycling, and all the beds were cleaned out,” Ryder said. “We put new soil in, put fertilizer in and they planted radishes and onions for a winter garden which works with Our Daily Bread. They’ve gone ahead and started the seedlings for spinach and broccoli. And then come summer, there’s been special request for green beans.”

Our Daily Bread is a food pantry that prepares and serves lunch daily to Athens community members in need. The garden was originally created three years ago and has been donating fresh food to local pantries and food banks ever since.

Barbara Benson, education professor and chair of the early childhood education program, said that while she volunteered on Monday, she remembered the man who implemented the garden project.

“Zach Churchill was in charge of student activities at the Athens campus about three or four years ago,” Benson said. “He had a vision of creating a community garden and his vision came alive through his perseverance.  He worked the land little by little and by the time he resigned to relocate, his gardens were flourishing. What I thought a lot about on Monday was Zach’s determination and how proud I was of his achievements.  I am certain Zach would be very happy to know the garden continues to give back to Athens.”

Benson said she also thought about the importance of the “Day of Service” that has been an Athens tradition for a long time.

“I get to ritually remember Dr. King’s legacy when I volunteer on MLK day,” Benson said. “I was at the MLK parade later that afternoon in downtown Athens and it was a beautiful way to finish out the day.”