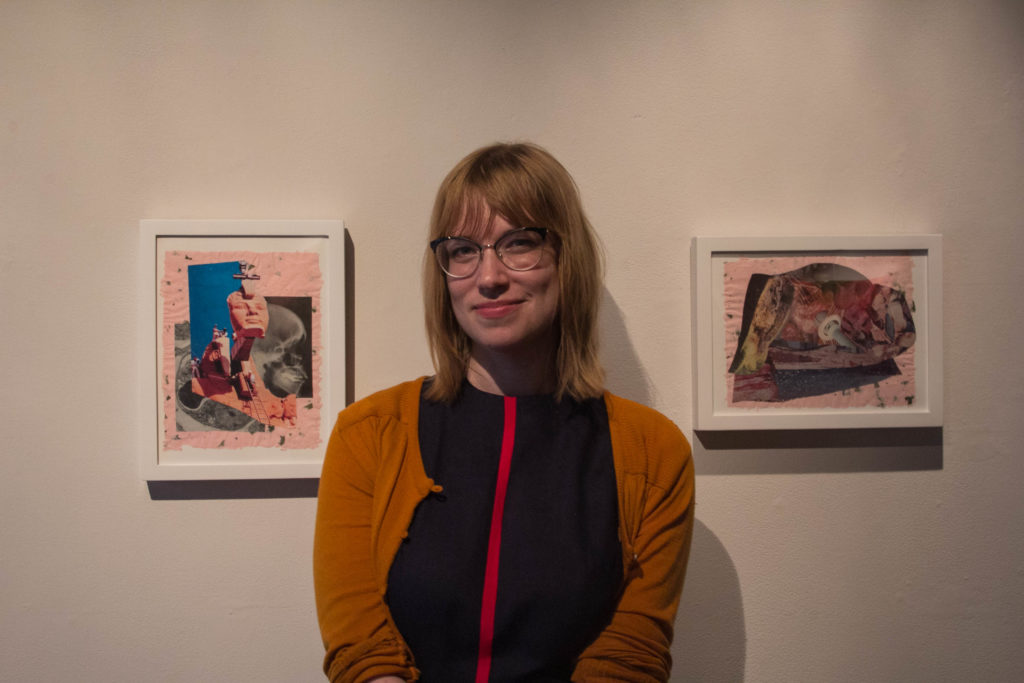 On Oct. 26, the Mason-Scharfenstein museum opened its gallery to visiting artist and instructor Allison Spence, who brings an equally captivating and gruesome collaboration of the body and the southern kudzu in her show Insider(Outsider).

Growing up in southern Florida, Spence fostered fascinations in the areas of science-fiction, botany, and anatomy, all evident in the coupling of elements in her exhibition.

In Insider(Outsider), Spence illuminates the anomalous relationship between the regenerative tissue of the body and the rapid spread of kudzu, and how both are accepted and rejected simultaneously.

Spence draws connections between the bodily transplant, now a common medical procedure, and monsters of classical literature such as Frankenstein. In this context, she discusses how both plants and human limbs can be rejected from their new home or host, or how they can bond and even overrun it.

Spence’s carefully cultivated joining of both the abstract and the abnormal transfigure the commonplace kudzu into an almost parasitic yet animated entity.

Startling against the gallery’s white walls, the effervescent green of the plant compliments the fleshy hues of prosthetic transplants, sculpted by Spence using Paper Mache and acrylic paint. This contrast engages the viewer enthusiastically, even aggressively.

One of the most compelling parts of Insider(Outsider) is the recognition that though the limbs are identical to ours, they are not ours. The parts create a sense of bodily alienation and thus instinctual rejection. The subjects are not only limbs, but faces and organs as well, accompanied by the names of their recipients. Spence remarks that “Kudzu is the vine that ate the south.” The green, leafy drapery, was originally introduced to prevent soil erosion. “Which it did extremely effectively,” Spence added. Situating itself in every corner of inhabitable surface space, it has come to represent regrowth and interminable life.

The reluctance to accept a body part develops as a sense of polarity. It is a substitute, one that will help recover functionality. Spence’s parts are settled against the backdrop of the swiftly traveling plant, nurtured under complacency. Wariness accommodates that which should be natural, and vague acceptance slowly creeps in. We cast out that which is a part of us and allow in something that is not.

Accentuating the larger pieces are smaller collage works on handmade kudzu paper. The two–dimensional arrangements of surgical motifs are appealing in their abstraction, each arranged in their own unique formation. Not only do these serve as ligaments to the canvased photographs aesthetically, but also reinstate the experience, keeping it fresh in the mind. Taken by the grotesque yet captivating details, the kudzu not only lies behind, but also now encompasses the work. It demonstrates what it is like to cast something inside out by instinct, and to bring in a new and unrelated force, passively.