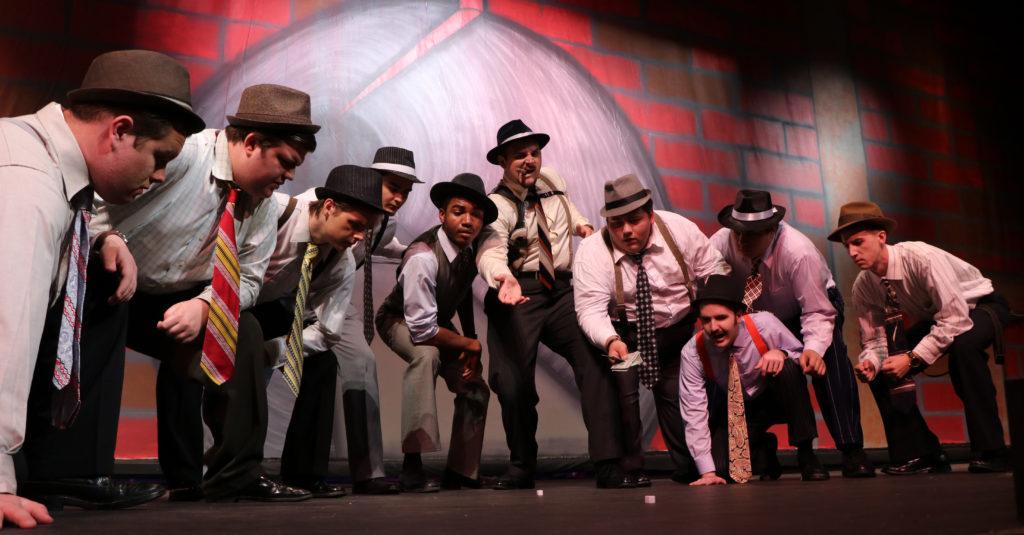 On Sept 28, the Piedmont College Theater opened their season with the iconic musical, “Guys and Dolls,” falling on the year of the Swanson Center’s 10th anniversary.

In the three years I’ve been at Piedmont College, “Guys and Dolls” has been the most impressive musical that the department has put together, both in its technical aspects and the cast’s performance. The set was phenomenal, giving the audience a vivid sense of the “hustle and bustle” of Depression-era New York City. The costumes were gorgeous, capturing and expressing each character’s personality. Despite the days of practice and preparation taken away by Hurricane Irma, the cast and crew managed to make ends meet and put together a wonderful show.

During the Saturday-performance, the crew of “Guys and Dolls” experienced some technical difficulties, when their headsets stopped working. This meant that the Stage Manager was unable to call cues for the lights, sound or set changes. Nevertheless, as they say, the show must go on. And so it did. The performance continued flawlessly, giving the audience no indication that the crew was operating by themselves, with zero calls from the stage manager. The crew deserves their own round of applause for running the show so smoothly despite the less-than-ideal circumstances.

The cast of “Guys and Dolls” did an amazing job, harmonizing wonderfully not only in song and dance, but also in stage chemistry.

For junior Aubrey Peat, who played the role of Sarah Brown, this was her first time playing a lead role in a Piedmont performance.

Sarah Brown is the leader of a branch of the “Save-a-Soul” mission and has no time for the smooth talking, high betting Sky Masterson, played by junior Aleek Reed. This was Reed’s second lead role at Piedmont College. Masterson is similar to Reed’s previous lead role, which was in the musical “Chicago”. In “Chicago,” Reed played a suave con-man lawyer, Billy Flynn. As opposed to Flynn, however, the character of Masterson has a much bigger heart, and while he initially pursues a relationship with Brown for the wrong reasons, he slowly begins to genuinely fall in love with her.

The two characters have several sweet duets throughout the show, including “I’ll Know,” in which Brown sings about how she’ll know the perfect man for her when she sees him, and “I’ve Never Been in Love Before,” in which Brown and Masterson sing about falling for each other.

Of course, the characters hit a few bumps throughout the show, but in the end, Sky and Sarah marry each other and even get to live happily ever after. Peat and Reed have great stage chemistry and their voices harmonized beautifully throughout the show. I’m sure we’ll be seeing more shows starring these two in the future.

The other two leads and lovers in “Guys and Dolls” are Miss Adelaide and Nathan Detroit. The role of Miss Adelaide was played by senior Chelsea Gittens. This was Gittens’ last role at Piedmont, and she definitely gave it her all. Gittens pranced and danced on stage as the overdramatic and sometimes ditzy Miss Adelaide, all while warming the hearts of the audience.

Until a week before the show opened, the role of Nathan Detroit belonged to freshman Lucas Alvarez. Due to unforeseen medical circumstances, however, the role went to sophomore Dakota Stockton. After only a week of adapting to the new role and learning his new lines, Stockton pulled off an incredible performance, giving no indication that he was new to the role.

Together, Stockton and Gittens created quite a few laughs as their characters struggled to make their love work. It’ll be sad to see Gittens leave the Piedmont Theater, but we’re looking forward to seeing Stockton appear in future shows.

The leads weren’t the only ones who gave memorable performances. Sophomore Tyler Vandiver, who played Nicely Nicely Johnson, had quite a few show-stopping numbers, such as “Sit Down You’re Rocking the Boat” and “Guys and Dolls.” Senior Levi Doublet also made a memorable appearance as the intimidating but lovable Big Jule, while senior Zach Grizzle warmed our hearts with his rendition of “More I Cannot Wish You.”

Despite the several wrenches (and one hurricane) thrown at the cast and crew while they put the show together, the department managed to put together a phenomenal show. “Guys and Dolls” will certainly go down as one of the Theater Department’s best shows of all time.