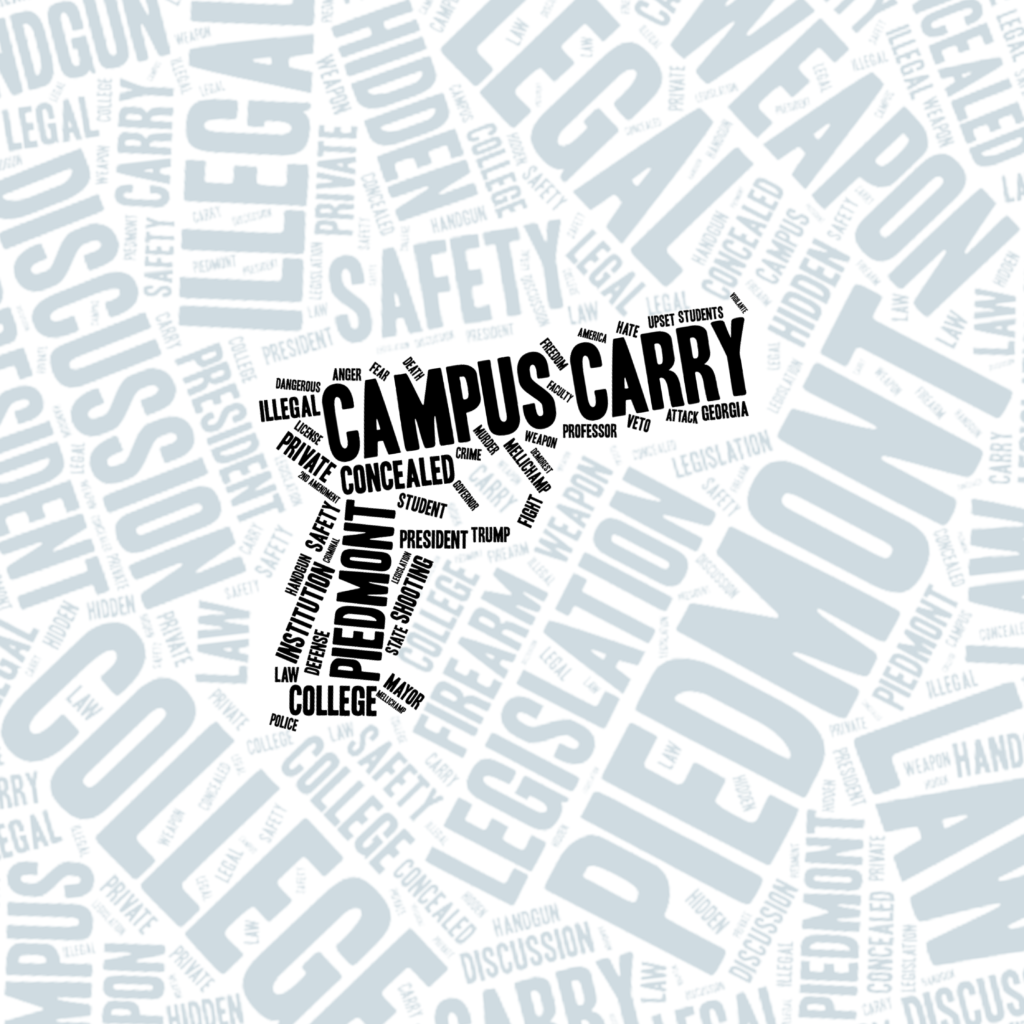 This semester, the first since the passage of House Bill 280, anyone with a concealed-weapon permit can legally carry firearms on public college and university campuses in Georgia. The state is now one of at least 34 in the nation to pass such a measure. Supporters and critics alike cite safety issues for their respective stances, but here at Piedmont, the debate is moot.

As a private institution, Piedmont College is not required to comply with the new law. Because of a Georgia law regarding private property rights, private schools can decide to prohibit concealed carry on campus.”

“The notion that more guns make us safer is a fallacy,” Mellichamp said. “The data disproves it.”

The World Health Organization found the rate of gun-related murder in the U.S. to be 25 percent higher than 22 other high-income countries. According to the 2010 study, 92 percent of young people between the ages of 14 and 24 killed by guns were killed in the United States.

“How does that tie in to an undergraduate population?” Mellichamp asked. “We’re talking about those people!”

Mellichamp said he feels he has a responsibility to protect everyone on the Piedmont campus.

“This kind of data convinces me that our stance is the right one,” Mellichamp said.

“Traditionally-aged college students will do whatever they want to spread their wings and feel their newfound freedom. Sometimes that means they drink a little too much, sometimes it means they might get into a scuffle with another student.”

“Adding guns into that equation could lead to a potentially lethal situation,” the president said. “I couldn’t sleep at night if I felt like that was a possibility. I wouldn’t want to be president of the college, that’s how strongly I feel about it. I know that’s not a popular opinion with everybody. But I’ll take the data.”

In 2015, the most recent year for which records are available, there were 36,252 firearm deaths in the United States, according to the National Center for Injury Prevention and Control, a unit of the Centers for Disease Control.

Of those deaths, 12,979 were considered homicides and 489 were unintentional, the center said. Suicides, which accounted for 22,018, was the leading cause of firearm deaths.

Laws only restrict law-abiding citizens, Austin said, not people who use guns with criminal intent.

“Humans scare me far more than guns,” Austin said. “In the heat of the moment or something that is cold and calculated, either way it’s a choice. I don’t like my choices limited. And I trust other human beings who carry.”

Dr. Austin admitted there is a high degree of human error involved, even guaranteed, in gun ownership.

“People are human,” Austin said. “They make mistakes every day. You handle a gun often enough and you will accidentally discharge one at some point in time. It will happen. Not a reason not to have one.”

As mayor, Austin made it legal for his city employees to carry concealed weapons at work. But in compliance with Piedmont policy, he said he does not carry a weapon on campus.

“They have a right to make that policy and I have a right to choose whether I want to remain employed here or not,” Austin said. “I’ve often been asked, ‘Are you carrying?’ And my answer to that is concealed means concealed. You should have to guess. If I do it well enough you’ll never know.”

Austin said he believes human beings have an inherent right to protect themselves.

Even though campus carry is prohibited at Piedmont, there are professors and students who do bring firearms on college grounds, student Andrew Guelzo said. “No matter what the rules say, there are always people who will break the rules. Even people of authority who are supposed to be upholding the rules.”