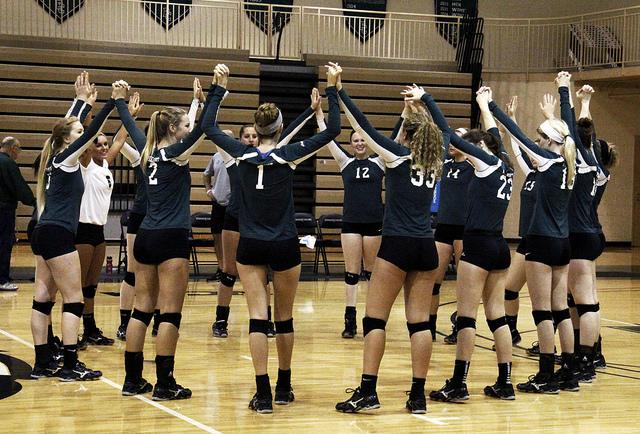 Sneakers squeaked on the hardwoods of the Cave Arena in the Johnny Mize Athletic Center on Sat., Oct. 3 as the Piedmont College volleyball team faced visiting Wasps of Emory and Henry College as part of a tri-match tournament. The Lions won 3-0, pushing the teams overall record to 9-7.

“If we keep going like this, we are going to be in good shape,” said Head Volleyball Coach Sid Feldman.

During the first set, Lions gained an early lead, but it was soon matched. The two teams battled, tied for a majority of the time. However, the Lions took the lead as the match went on, winning 25-19.

Fourth-year right side Taylor Cramsey led the team in kills, gaining 13 by the end of the game.

“Cramsey has just been clobbering the ball,” said Feldman.

In the second, the Lions continued to dominate, gaining a five point lead early. The Wasps caught up over time, tying the score then taking a two point lead. Still, the Wasps’ efforts were squashed, and the Lions won with a similar score of 25-19.

Fourth-year outside hitter Mallory Leary was able to gain the most aces for the game.

“Even though they were set up against her for defense, [Leary] was still able to put the ball away,” said Feldman.

For the third, the Wasps fought for the chance to keep their chances for a win alive. Piedmont kept up with them, keeping the score even throughout the set. But, when the Wasps started to gain a lead, inching towards hitting 25, the Lions began to call more time outs and slowly caught up. The Lions pushed, and they were able to pull out the third win. This set ended with a 25-21 score.

By the end of the match, first-year libero Haley Hixon led the team with 15 digs.

“Every time [Hixon] touches the ball, it is right on target,” said Feldman.

The day continued with Piedmont defeating Wesleyan College as well in a similar manner to which they beat the Wasps. However, Emory and Henry College beat Wesleyan College, 3-0, just before Piedmont faced Wesleyan.

The Lions will hit the hardwood again on Oct. 6 at 6:30 p.m. to face the visiting Panthers of Lagrange College, a conference rival.