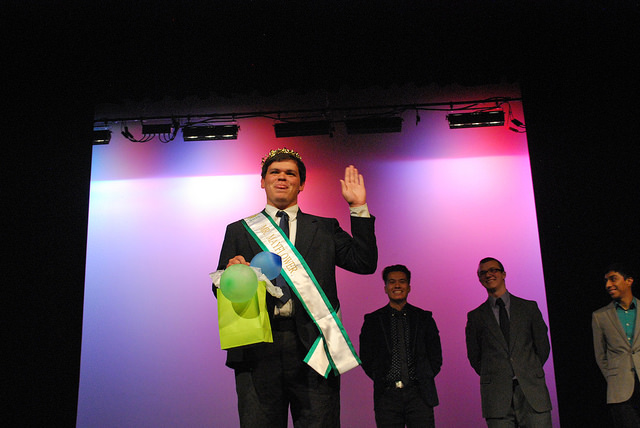 The winner of the competition was Marcus Herrara, a freshman at Piedmont College.

“It’s very surprising. I didn’t think I was going to win,” said Herrara when crowned Mr. Mayflower. “It’s pretty awesome. I really like it.”

Mr. Mayflower was a fundraiser for Soup Kitchens in Cornelia. Attendees paid a two-dollar fee or donated three can goods.  The competition took place on the Main Stage in Piedmont’s Swanson Center. Amber Ethredge and Miss Georgia were the emcees for the event. Five contestants took part in the competition: Jason Dang, Tom Gerrell, Marcus Herrara, Thomas Looney and Gabriel Gutrerres.

The competition consisted of three parts: a talent portion, a formal wear portion and a trivia portion. Contestants charmed the audience with their talents, humorous comments and personalities.

“I really wish more people could have shown up. I thought it was really nice. I think they should do it again. It’s nice that the money is going to the soup kitchens,” said freshman and forensic science major Krista Alberton.

For the talent portion of the competition, contestants awed the audience with accordion playing, traditional Aztec dance, comedic acts, hip-hop dance, and a memorized speech.

In the formal-wear portion, contestants confidently strutted down the main stage in their best formal wear. In the trivia portion, they answered two questions and made the audience laugh with their witty comments and answers. As a bonus, the contestants were asked to perform their best pick-up line and swept the audience of their feet.

The audience enjoyed the contestants’ performances, energy, humor and personalities. 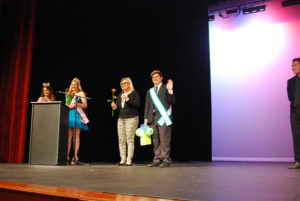