One Flew over the Black Box [SLIDESHOW] 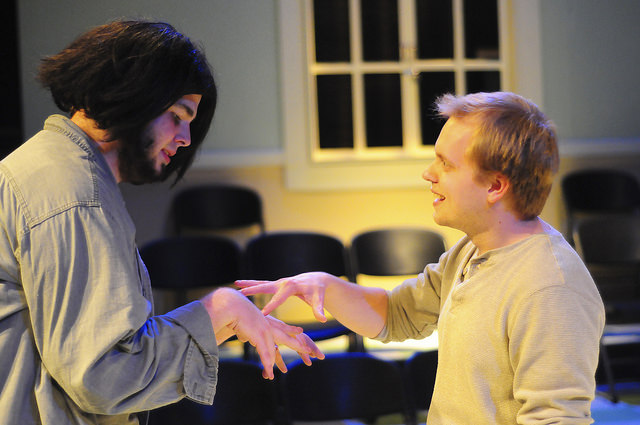 On Thursday, April 9 the Piedmont College Theater’s most recent play entitled, “One Flew Over the Cuckoo’s Nest” premiered.

The play was originally a novel written by Ken Kesey, published in 1962. A year after the novel’s release, it was formatted into a Broadway play by Dale Wasserman.

The plot of the play features a group of patients living in a psychiatric hospital. The patients are divided into two groups, the acutes, who can be cured by medication, and the chronic, who cannot be cured.

The monochromatic lives of the acutes are changed when a man by the name of Randolph Patrick McMurphy,a criminal pretends to be mentally disturbed and is sentenced to stay in the institute instead of prison.

McMurphy aids the patients in going against the main nurse, Mildred Ratched. McMurphy suggests doing things to aid his personal pleasure, such as watching the World Series on TV or having a party.

When Nurse Ratched finds out that McMurphy had been setting up parties for the other patients, she gets upset and scolds them.

Billie, a timid young man and patient is bullied by Nurse Ratched. She tries to make him feel guilty for his actions at the party. Billy then slits his throat, killing himself.

McMurphy injures Nurse Ratched’s neck and afterwards is forced into lobotomy, a psychiatric operation performed to the prefrontal cortex of the brain.

Chief Bromden, another patient who is claimed to be deaf and mute sees McMurphy and decides to put him out of his misery by killing him.

Dale Harding the unofficial leader of the patients sees Chief and tells him he must run away before they find him. Chief agrees and makes his escape as the alarms go off.

The play was set up beautifully in the Black Box Theater.

“I really enjoyed it,” Caitlin Tripp, freshman nursing major said. “I thought that setting it up in the Black Box made it feel a lot more intimate.”

The actors did a great job and were in character even before the play had started. The dialogue and physical actions were very well acted.

The plot caught many people’s attention and was very suspenseful, giving the audience more curiosity about what would happen next.

The costumes were well made and each costume matched its characters personalities perfectly. The props were well made. A large medicine counter was made at the corner of the stage. It provided a very gruesome atmosphere, as if the psychiatric hospital was real.

“I really enjoyed it,” freshman education major Raven Champion said, “I would recommend for anyone to go see it.”

The play began on April 9 and ended on April 12  in the Black Box Theater.