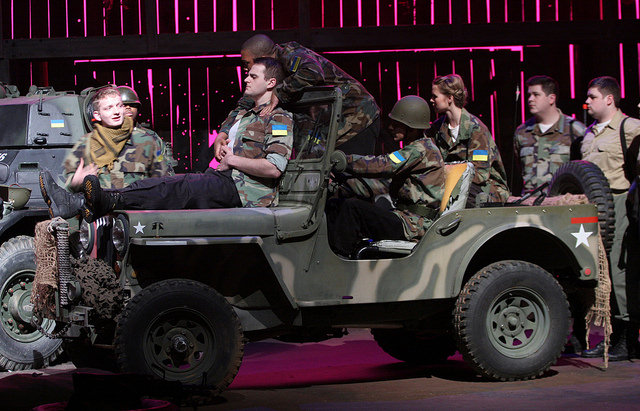 Piedmont’s theater brought William Shakespeare’s “Macbeth” to life from February 12-15 in Swanson Center Main Stage. This particular rendition, however, may not be like any Macbeth that you have seen before. The version Piedmont presented, directed by John Speigel, is presented in modern day Ukraine.

This fresh twist gives new face to the beloved classic and despite the new filter, the story remains familiar and true to its roots. The language and dramatic elements remain untouched, though. The contrast between the gritty modern landscape and the classical Shakespearian prose makes for a unique theatergoing experience.

The set was wonderfully designed and drew the audience into the wartime ambiance. The set (complete with watch tower, fox-hole, and tank) was well staged and served well for the action. Despite some visibility issues from the watch-tower the set was beautiful and offered a well-designed backdrop for the production.

The modernized setting isn’t the only unexpected change in this rendition. Gender roles weren’t considered in the casting of this performance. The most outstanding instance of this is Banquo, Macbeth’s right hand man, who is customarily portrayed as a man is played by actress Jamie Doublet. The language is altered to fit the gender changes, and the changes are well incorporated so those who haven’t experienced “Macbeth” before would not even realize it.

Yet another surprise was the use of firearms in the performance. Of course the weapons fired blanks, but that surely didn’t take away from the cinematic effect for the audience. In the first minutes, these weapons are demonstrated, and the performers come out with a bang, portraying a battle scene.

Freshman drama education major Zach Grizzle said: “I love a challenge. And a personal challenge for me was learning to use, handle, and fire blank guns. I think this aspect was a new area for a lot of the cast, but everyone in the show put on their big boy pants, and the gun effects were spectacular because of it.”

The cast meshed well and all the performers pulled their equal weight. The blocking looked natural and fluid and you could tell the director went to great lengths to perfect the movement around stage. Grizzle said, “I really enjoyed my overall experience in the show. There were many doubts about the direction of the play from the beginning from the whole cast, but I always tried to stay positive. And I think that the product we came out with is possibly one of the best shows I’ve worked on in 8 plus years of working in theater.”