The Major League Soccer (MLS) off season has surely been one to remember. Here is a refresher course in case you missed all the headlines:

Along with Altidore, Toronto FC also bought Italian international, Sebastian Giovinco from Italian giant, Juventus. He is just under five and a half feet tall, but he will be one of the fastest players in the MLS. His dribbling skills and control should be a deadly combination with Altidore.

Another team who was busy this offseason ,so far, has been the newly established, New York FC.

New York FC, or NYFC was just implemented into the MLS, so they will have their first competitive season come next year. One of their first arrivals shocked many. NYFC signed Frank Lampard, a well- known English player who established himself at the English club team, Chelsea FC. He has been on loan at Manchester City this year, but he has already signed his two-year contract with NYFC, which will start in July – midway through the new team’s first season.

Following the trends of the likes of David Beckham, another English player joins LA Galaxy.

Liverpool legend Steven Gerrard signed an 18-month deal worth just under six million dollars. Gerrard, 34-years old, will be joining the Galaxy following one of the most storied careers in Liverpool and English soccer history.

In 17 seasons with Liverpool, the team’s longest-serving captain has made 696 appearances while scoring 182 goals to date in all competitions. Gerrard also has served as captain for England, making 114 appearances and scoring 21 goals on the international level. Most recently, he captained his country during the 2014 FIFA World Cup. This proves that the MLS has some great appeal to international players, especially for older players from top leagues that still have something to offer.

Every year, there have been improvements in the MLS, and this year is no exception. With the MLS growing in popularity, there seems to be a great trend in the rise of soccer in America. 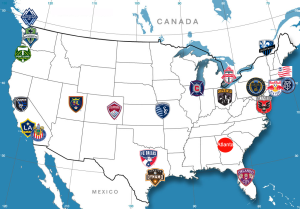