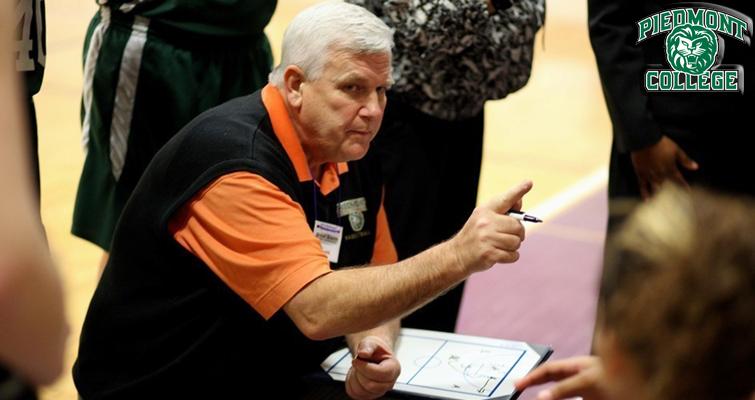 After ten years at Piedmont, Athletic Director Coach John Dzik announced his retirement. The news was revealed to Piedmont faculty and staff on Jan. 12 by an email sent out by President James Mellichamp. But Piedmont’s coaching staff was not surprised. He had first announced his retirement internally before Christmas.
“When I came here ten years ago, I said to the then president, Ray Cleere, ‘my time frame is ten years. If you like me, and I like you, maybe we will be married for ten years.’ And we have been. It has been a good situation,” said Dzik.
But those ten years are up, and Dzik and his wife are ready to move to their home on St. Pawley’s Island in South Carolina.
“I actually love what I do. I am in good health, so I have no real reason to retire,” said Dzik.
He said, however, his wife has been wanting to spend more time in South Carolina, and she would like to spend that time there with him.
“We like it there very much, and it is time for me to step aside and make sure Mrs. Dzik is as happy as she can be,” said Dzik.

Dzik met his wife in high school. They both grew up near Philadelphia, Pennsylvania and followed each other to college. Dzik, the first person in his family to graduate from college, received a degree in education.
After graduation, he acquired a job as an elementary school teacher. Over a seven year period, he taught third grade, fourth grade and kindergarten. While he was teaching, he was coaching. He began by coaching the local high school’s basketball team, and eventually, he became the assistant coach at St. Joseph’s University, a division I university.

But he left teaching and coaching when he went into sales. He did this for three or four years before he took a part-time job with Cabrini College. When he decided to get out of sales and work full-time at Cabrini, he was given the title of basketball coach, director of admissions and athletic director. Soon, because of the amount of work, he cut his work load down to his responsibilities as basketball coach and athletic director. He remained at Cabrini for a majority of his career, staying for about 25 years.

When he left Cabrini, it wasn’t exactly an amicable split, according to Dzik. A change in administration left Dzik looking for a job in 2005. At this time, Piedmont was looking for a new director of intercollegiate athletics, and after visiting Piedmont, he knew he wanted to see what he could do here. Piedmont reminded Dzik a lot of Cabrini, but he was pleasingly astounded at the quality and size of our athletic facilities.
Dzik said: “I think Piedmont is a wonderful place. I was lucky to land here.”

In the ten years he has been here, Dzik has grown the athletic department from 195 athletes in 11 programs to over 300 athletes in 15 programs. He also moved Piedmont from the Great South Athletic Conference to the USA South Athletic Conference in 2011. This allowed for more opportunities in scheduling and NCAA post-season automatic qualification.
“I feel like the ten years I have been here, we have made some real progress,” said Dzik.
And he hopes that when people look back at the ten years he has been here, they will note that he left Piedmont better than it was when he arrived.

“We owe him an enormous amount of gratitude for his exceptional service, and we will find appropriate ways to honor that during his last semester with us,” said Mellichamp in an email to the faculty and staff of Piedmont.
Dzik had been discussing his retirement for over a year with Dean of the Walker School of Business and Dzik’s boss John Misner. Mellichamp was involved in the discussion when Dzik became more serious about retiring and when Dzik was approaching the ten year mark. But Dzik wanted to wait to announce it just before he attended a convention where he would be running into his colleagues.

“I wanted to try to address it to them, rather than reaching out to them in some other way,” said Dzik.
But who will be taking his place? The administration does not know yet, but according to Mellichamp in the email to Piedmont’ faculty and staff, they have begun the process of hiring a new athletic director.
Dzik said, “I am hoping it will be an internal candidate.”
His contract ends in June, so Dzik hopes by then there will already be a new athletic director in place. He said he believes an internal candidate will make the transition smoother. Still, Dzik explained how the current coaching staff at Piedmont is stable, so having a new athletic director should not affect the quality of the coaching at Piedmont.

Now, Dzik is making preparations to move to South Carolina where he is excited to have Memorial Day to Labor Day off.
“I haven’t been home for the summer with nothing to do in quite a long time,” said Dzik.