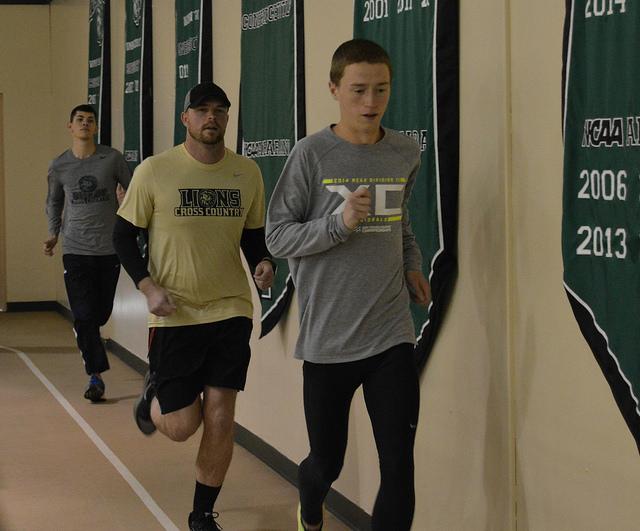 It’s a new semester, and the athletic department has added a new program. Track and field has been a program that Piedmont has worked on adding for quite some time. Cross country and track and field Coach Jeff Jenkins was excited to talk to The Navigator about the new addition and his hopes for the program this season.
“I, [Director of Intercollegiate Athletics] John Dzik, and [Assistant Track and Field and Cross Country Coach] Ian Layne and the rest of the coaching staff have helped to move this program forward, which has been in the talks for a while,” said Jenkins.

In past years, a few athletes competed in some track and field events, but Piedmont never had a full track and field schedule. This year, Jenkins plans on having eight total meets, kicking off the season on Jan. 25 in Birmingham, Ala. Jenkins said that the program is moving in the direction of becoming a full squad with events including sprints, jumps, throws and more.

Since Jenkins and Layne have just arrived at Piedmont, they were not involved in the recruiting process before they got here. Now in their first year, they are trying to find new athletes to bring to the new program.
Jenkins said, “Our hopes are that we can fill the events within the first five years and have a full coaching staff and roster.”
Jenkins said that by creating the new program, he believes that it will bring a lot of students to the college. He said the variety of attitudes and body types that track and field attracts appeals to many student athletes. Because of this, their team may consist of athletes that have never competed in track and field before, but this may cause them to be successful because of the need for variety.

So far, the only student athletes to have joined the team are cross country members as well.
“That’s what it will be for a little while. We are open to the addition of student athletes who are interested,” said Jenkins. “Anybody who wants to come and compete, we will give them an opportunity.”
However, there are no women cross country team members that joined the track and field team due to various reasons Jenkins said.
“We’ve dealt with some difficult things with a female team,” said Jenkins. “Our top two girls are not returning. Then, our number three girl is a lacrosse player, and she will not be doing track.”
With that said, Jenkins explained that he and his staff will work with the team they currently have, and open the team to other students to join, if interested.

“One of the things we’re arguing is that the college is going to get a lot of numbers, and it will also allow a lot of opportunities and a major diverse opportunity for students to compete in. We want to do things that help the college as a whole,” said Jenkins.
One of the student athletes to join the track and field program this season is freshman finance major Rily Passini.
“This sport has provided me the opportunity to compete with a team environment while still being able to measure my individual performances and track my progress,” said Passini. “My coaches are doing a great job of building the track and field program from the ground up and making both the cross country and track and field programs very competitive at the same time.”

Also crossing over to the track and field side is freshman history education major Cody Parker who said he is also excited about the new program and thinks the program will bring in more well-rounded student athletes.
“Starting a new track and field program requires considerable front-end planning and coordination. However, our coaches’ efforts and the athletes’ efforts to be invested in this process will produce a multitude of dividends,” said Parker.
Parker said that his goal for this season is to place high as possible in all of his races and set some school records.

But for the future, we may be seeing a track and field facility spring up.
Jenkins said, “There are hopes, and I hope we will have a full facility and all the equipment we need within the next five years.”