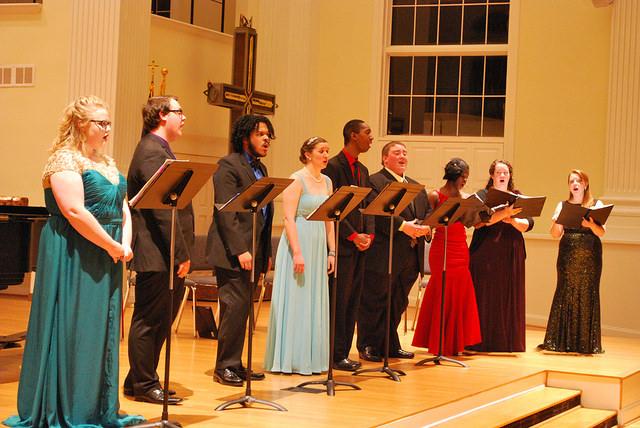 It was a chilly night on Jan. 9, but the Opera Workshop class warmed the crowd with their entertaining and moving performance of opera scenes.
A Concert of Great Scenes from Great Operas was held in the Piedmont Chapel at 7:30 p.m. to a small but worthy crowd.
The concert was directed by Assistant Professor of Music Jonathan Pilkington while Areathea Ketch accompanied the singers on the piano.

The class sung songs from operas written by Wolfgang A. Mozart, Georges Bizet, Giuseppe Verdi and Arthur Sullivan. The scenes performed were The Impressario, The Magic Flute, Carmen, Falstaff and Trial by Jury.

When the concert was over, the group bowed to a pleased and impressed crowd of faculty, staff, students, family and Demorest locals who gave a standing ovation.
Mooney said that she thought the performance went really well and that she was happy to see all of their work come together. “We’ve been preparing for this since the end of October and this week to prepare for it,” she said.
“The songs were really fun,” said Abraham-Quilles. “At the end of every practice we had I always felt accomplished.”

Hood said that she was nervous about the performance but happy to finally perform the group’s hard work. “We had been practicing for so long and when it finally happened it was great,” she said. “I’m friends with everybody and it was like a big party in every rehearsal.”