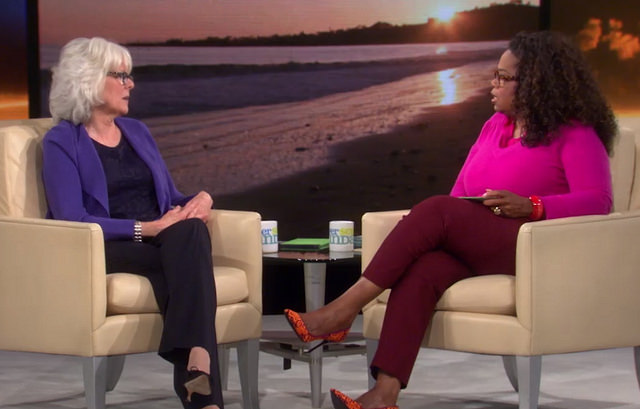 On Nov. 9, Piedmont’s very own Butman Professor of Religion Barbara Brown Taylor was on Oprah Winfrey’s talk show “Super Soul Sunday.”
Taylor was an Episcopal priest since 1984 and has written 13 books. Her most recent one being “Learning to Walk in the Dark.” She has been featured on TIME Magazine’s 100 most influential people list.
In Winfrey’s Super Soul Sunday, she shares her thoughts on religion, life and humanity. Her thoughts are very provocative and thought provoking, making one wonder about themselves and ask questions.
Taylor tells Winfrey and viewers to embrace darkness, not to run away from it.
“A certain amount of darkness balances out with light,” she said. Her definition of darkness, she tells Winfrey, is the unknown.
“Darkness is when you don’t know what to do.”
Taylor also gives some very insightful advice.
She says, “Life is a sailboat. We like to think of life as a train. You pick a station to get off on and you’re done. But in reality life is a sailboat you never know where you’re going to land or how you’re going to get there. No matter how much planning you do it’s never for certain. We have to watch the waves and the current and check the winds. Life will take us to the unknown.”
Charismatic and humorous, Taylor sat down with the Navigator and talked about her book and experience with Winfrey on the show.
N: How did you feel when Oprah asked you to be on the show?
BT: I thought it was a mistake. I got a call from the director’s office saying Oprah Winfrey wants to meet you. That was really odd. I’m a writer, I love public radio, but I flee from cameras. But I wanted to meet her so much I thought I would just suck it up.
N: How was the overall experience?
BT: It was really scary and I worked really hard to get prepared and it was over in an hour. I don’t ever want to repeat the experience. It was way too scary and I’m really glad I did it.
N: In the show you used the term “embracing darkness” could you elaborate on that?
BT: I get really interested in ways that people use dark always in a negative way and they always use light for something that’s positive. Because I teach religion [people] use it a lot in religion, dark is always about evil and light is about goodness. But that’s not right. If you think about your life terrible things happen in the light and good things happen in the dark. I just thought that the whole dark/light opposition doesn’t hold up to the weight of experience. That’s what led me into writing the book. The book talks about physical darkness, emotional darkness, or spiritual darkness. I called the book “Learning to Walk in the Dark” because darkness is an experience of not knowing. I think that the moments of unknowing are the richest times in life.
N: Do you have any advice for students who are experiencing their moment of darkness?
BT: I think that each of us has a kind of inner wisdom. That lets us know when we need help from a companion. I would say to students who have an intuition of being in a dark place to find a companion. But there are other parts when intuition is saying, “No, you’re changing and growing. It’s OK to be in the dark, it’s OK to not know where you’re going.” It’s OK not to rush. It’s OK to say, “I’m not sure yet.”
N: What are your thoughts on life and death?
BT: Death is the great unknown. For a lot of people, death is the biggest darkness. It’s a good thing I’m going to die one day. I don’t want to live here forever.
N: What are your thoughts on religion?
BT: Religion can bring out the best in people and can bring out the worst in people. That tells me the best and the worst are resident in every human being. Religion has incredible power for good and incredible power for evil.
Taylor’s book “Learning to Walk in Darkness” is currently being sold at the bookstore.