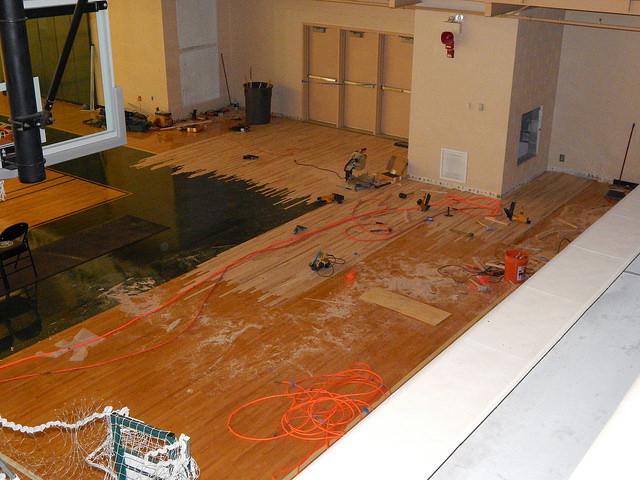 Signs posted on the doors of Cave Arena in the Johnny Mize Athletic center warned Piedmont students of
repairs on the home court of the Piedmont Lion’s volleyball and basketball teams. According to Director of
Intercollegiate Athletics John Dzik, water damage mutilated a part of the wood floor.
Originally, Piedmont was informed that only the portion of the floor near the back doors was damaged, but
after removing that portion, the flooring company discovered it stretched up to the three-point line closest to the
back doors. According to Dzik, when the court is exposed to water, it becomes warped and starts to bubble,
becoming unsafe to play on.
Dzik said that the water damage came from outside. When rain poured over Piedmont, the water collected
near the doors and seeped into the wood in the gym. When Dzik realized that the problem was a poor drainage
system, he called in administrative services to correct the problem.
Administrative services found that the system used to drain water in the area was taking on more water than it
was originally built to handle, and there was an issue with the sloping of that area behind the gym, according to
Assistant Vice President for Administrative Services Parks Miller.
Miller said that water would back up along the wall of the gym, and even though he believed the problem had
been fixed before, when he sent a contractor in to investigate, new issues were discovered.
Dzik said he believes that this was going on as long as he has been at Piedmont, but the problem became
worse only recently. Miller said that the issue was fixed by the same contractors that are working on the new
student center, and they inserted larger pipes into the drainage system and corrected the slope behind the gym.
“This was an ongoing problem that I do believe has been resolved,” said Dzik.
Since the water began draining properly, the next step was to fix the damaged floor. The flooring company is
ripping out the damaged wood, replacing it and refinishing it. The posted signs stated that the gym will be
closed for repairs until Wednesday, Sept. 24.
But with these repairs occurring, what will happen to the volleyball game scheduled for Sept. 24?
According to Dzik, at the beginning of the project, the flooring company said that if it finished a certain
amount of work by Sept. 19, the volleyball team would be able to play on the court.
“The section that’s on the court will need a couple days to cure and dry before we can actually play on it, so
we won’t reopen the gym until set-up for the game on Wednesday if the flooring contractor says it’s ok,” said
Dzik.
But Dzik said that if the court was not completed in time for the game, volleyball would change the date of
the home game versus Covenant College to Oct. 22, and Piedmont could travel to Covenant College on Sept. 24.
Third-year volleyball player Katie Faith said, “We know it must be done and will better the gym in the long
run.”
But the volleyball team was not the only group affected. Basketball has begun practice in preparation for their
upcoming season.
Second-year basketball player Chase England said, “Due to the work on the gym floor, we are having to
completely change our schedule for the next week as well as lose a day of open gym.”
But this shouldn’t affect their season, based on the work the team has put into their preseason, according to
England.
“I am happy they went ahead and fixed it before we got into our season,” said England.