Last season, the women’s soccer team went 18-2-2 overall and won the USA South
conference championship. According to second-year midfielder Haley Hall, their goal is to
accomplish this and more this season. The team plans to win the championship again and make it
past the first round of the national tournament.
In preparation for these goals, Coach Stephen Andrew recruited 15 freshmen for this
2015 season. With such a young team, many of the freshmen will need to rise to the challenge.
Their skills were tested in their opening tournament on August in Maryville, Tenn.
Nicole Entinger, a second-year forward, said: “A lot of the freshman that traveled really
stepped up during game time. My first game last year was really stressful, and I think they
handled it very well.”
The Piedmont women’s soccer team started their 2014 season off last Friday, Aug. 29, at
the Maryville College Invitational in Tennessee. The season opener was against Hanover
College, who last year finished 18-2-2 last season, the same as our Piedmont women’s soccer
team. Despite their similarities, the Lady Lions suffered a loss to the Panthers 3-0. The Lady
Lions put a total 17 shots on frame but unfortunately couldn’t finish.
Micheala Gardner, third-year goalie said, “Not being able to execute our shots will be one
of our biggest flaws this season. We need to be more multi-dimensional and not rely on the same
players to score.” The Lady Lions showed their capabilities the next day of the Maryville Invitational
against Emory & Henry College with a 5-0 win. Fourth-year midfielder Shayna Rogers had a big
game with three assists and one goal for herself. One of her assists was to defensive player,
fourth-year defender Kelsey Shaffernoth. Shaffernoth got the opportunity to score while playing
up on a corner kick.
Hall said, “Goals like Kelsey’s really hype up the crowd and the team and give us the
momentum we need to finish teams.”
One athlete that is heavily impacting the team is Gardner. She will be taking a large leadership
role as the starting goalie this season.
Gardner said, “I do get stressed out sometimes because it is such a high pressure position
but after years of playing I learned that the team relies on you to set the tone of the game so you
have to just stay calm and composed.”
In her games at the Maryville Invitational, she made 11 total saves. Six of them were against
Hanover and five against Emory and Henry College, which gives her a 78% saving average.
Coming up on the Lady Lions schedule is their first home game on Sept. 11, at 7 p.m. They are
facing the Agnes Scott Scotties.
Entinger said: “Last year we did not mentally prepare ourselves enough for this game.
Even though we won last year against Agnes Scott, we expect to take this game more seriously
and give the fans a great season opener to watch.” The Lady Lions will be also be playing Maryville at home this year on Oct. 15, at 6 p.m.
Piedmont was ranked first place over Maryville in the preseason rankings to win the USA South
Championship, which only adds to the tension of this game.
Shaffernoth said: “Maryville is one of our biggest rivals. It is a home game this year and
should be one of the best games to watch.” 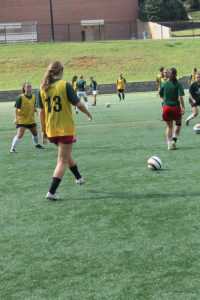