It’s only weird if it doesn’t work 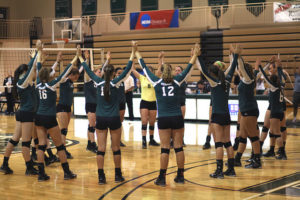 Piedmont College women’s soccer players Marissa Akin and Haley Hall huddle around
one of their phones moments from stepping on the field. The music video of “Waka Waka” by
Shakira plays, but it doesn’t play just once. The two second-year players repeat the song. Why?
Because, according to them, if they only play it once, the game will end in a tie.
This is just one of the many rituals you can see from the Piedmont College athletic teams.
From not washing your socks to chanting before a game, almost every athletic team has
something. With new seasons arriving, new traditions are sure to arise.
For the Piedmont College baseball team, at the end of every year, the seniors add on to
the current team rituals.
Fourth-year pitcher Chris Georshel said, “The goal is to make the ritual a focal point for
the team and have everyone moving in the right direction.”
The newest ritual, started by last year’s seniors, is to tie a knot in a rope after every
victory. But the ritual that has continued, Georshel explained, is that after their infield routine,
the team lines up to give each other high-fives. All the players, except the catchers, run through
first. The catchers trail the line and the players hit the catcher’s gear.
The Piedmont College softball team does something similar. After each player high-fives
her teammates, they circle up, pray and do a chant to pump them up for the challenge ahead.
Third-year outfielder Laura Carter wrote via email, “The rituals are very important
because they pump you up, get you ready and focused for the game and sometimes even give
you hope if things aren’t going the way you want it to.” Just like the softball team, there are a lot of teams on Piedmont’s campus that pray before
games. According to third-year libero Katie Faith, Piedmont’s volleyball team typically has
fourth-year opposite Kaitlin Norman lead a prayer and, started by former player Danielle
Maffett, different players “get their gospel on” and shout out phrases like “all my brothers and
sisters say amen.” Even teams that you might not think would have a lot of rituals, like
cheerleading or cross country, invite their athletes to pray before they compete.
Chanting is common too. According to second-year tennis player Amanda Blackwell, the
tennis team begins every game with a team chant. Volleyball participates in team chants, too.
Faith said that the team does a chant both before and after each game.
“It kind of builds team camaraderie,” said Faith.
But some athletes have their own rituals too. While the team ritual is important, an
individual’s ritual could be just as important to the athlete’s confidence to play.
Georshel drinks Emergen-C and stretches before every game. He also is sure to bring his
own rosin bag to the mound and grabs it before every inning. He is not alone.
Carter, via email, said: “I always draw a cross in the dirt and write the initials of my
coach that passed away. I always listen to my walk-up song right before I take the field in
person. Lastly, I always have a short and long sock, never two short or two long.”
And it is not just baseball and softball players. Blackwell has her own tradition, too. She
calls her mom before every match.
But these rituals aren’t just random. There is a reason for these traditions. Blackwell calls
her mom before every game for a reason. The volleyball team prays for a reason. There is so
much more to these rituals than a chant or a high-five. Georshel said: “A lot of people assume they do these rituals because it helps them win.
That is partially true, but it isn’t because of why they think. People are successful when they are
consistent in doing the right thing. Consistency, hard work and teamwork makes you succeed,
not the ritual you’re actually doing.”