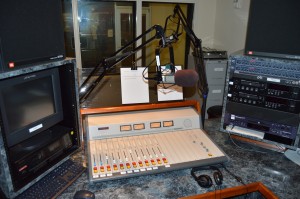 The student-run radio was formerly named WRFP and was available only online. This summer, however students, faculty, staff and locals of Demorest will be able to hear the station on an FM dial.

According to Mass Communications department chair Dale Van Cantfort, the department had been working for years to be granted by the Federal Comunications Commission (FCC) for an over-the-air signal, but none were available.

“This time last year, the FCC announced that they were going to be opening a window of opportunity for non-profit organizations and educational institutions to apply for low power FM frequencies,” he said.

Van Cantfort explained that the FCC opened up this opportunity because it wanted to see if non-profit organizations and educational institutions could have a frequency without interfering with other currently existing stations in the area.

“Back in October of 2013 we were allowed to make that application and we got approval from the FCC. In June, we had it installed and we put it on the air.”

Van Cantfort also said that this is the first time in twelve years that anyone could apply for a low power FM.

“The FCC requires over-the-air broadcast stations to have call letters,” Van Cantfort explained. “There’s over 15,000 licensed radio stations in the country. So, what we were required to do at the request of the FCC was call letters for the station.”

Administration wanted the letters to be a reflection of the college. “One of the ways we did that was to have ‘PC’ in the call letters,” he said.

“When we did that, it came down to only having three sets of letters we could use and WPCZ was one of them.”

Van Cantfort emphasized that the radio station is a student-run station, and that programming will be up to the students.

The only time that Van Cantort will become involved with the station is when it comes to profanity or indecency.

“I have great people in the department to help guide me and I’m hoping the station will grow not only on campus, but in the community,” she said.

Haraka also said that the station will have a mixture of every type of music ranging from country, rock, pop, and oldies.

Senior mass communications major Xandy Green is the radio assistant manager this year and is excited for the station to be live.

“This brings a load of new opportunities for the mass communications department and everyone in it,” she said. “We really would just like to raise awareness within the student body so we can have more listeners.”

Van Cantfort said that this fall students will rebrand the old WRFP to WPCZ, Z98.7 FM and that a formal dedication of the facility will take place this semester.