Cafeteria Makes Changes for the Better 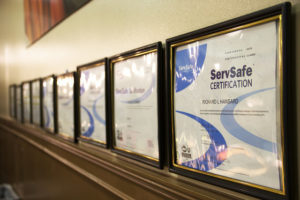 A lot of changes have been made over the summer at Piedmont College from technology to the fitness center,
and the Nielson Dining Hall is getting in on the action.
“Students will be seeing some new things coming their way, but I’m not sure they want to spill the beans on
that just yet,” said Director of Dining Angie Mixon.
“A couple of things are not up-and-going today, but hopefully Coke is going to install a new vitamin water
station,” she said.
“We had a district meeting over the summer and people shared some ideas they were doing at other locations
and if we can’t incorporate it here, we hope it is something we can use when we can move to a larger facility.”
One of the major things that the cafeteria changed over the summer was hiring new chefs and twelve new
associates.
“We have a lot of new folks this year who come from a culinary background. We knew with the increase in the
student population that it would be so busy,” Mixon said.
According to Mixon, three new chefs received culinary degrees from North Ga. Tech in Toccoa. These chefs
have wored all summer to rework the menu and add items students haven’t seen before.
“We kept some of the favorites, but we got some help from our regional chef as far as our menu planning. It
helped throw in some ideas that were different.”
Last semester, the Navigator uncovered some regulations the cafeteria associates were not following. For
example, there were pictures of workers handling food without gloves and not wearing the appropriate hairnets.
Mixon explained that she hated the way things happened with the last cafeteria article, but that she and the
associates take pride in what they do, because the students deserve it.
“The unfortunate thing that happened was that we did have pictures of things that had happened. The safety
of my students is number one,” she said. “I would never want anything that was put out to service that was
compromised in any way what-so-ever. I’m not saying we don’t make mistakes, but we do strive to give the
students a hundred and ten percent.”
Mixon said that all of the cafeteria associates follow regulations.
“They know they’re supposed to wear hats, they know they’re supposed to wear gloves and I get in a hurry
too,” she expressed.
“But one thing we do as a team together is that if we see something that’s not supposed to be, we let each
other know.”
Senior psychology major Leighann Crump said that she has seen an improvement in the food.
“The action station has more variety now, its not the same stuff every week,” she said.
“I do like the way they are trying to structure it more and more by asking students what they want more and
what they want less.”
For some students, the food definitely has variety.
“The food here is pretty decent, I’m not complaining,” said freshman vocal performance major Amin
Abraham-Quiles.
“High school was terrible and you couldn’t really get the selection you want, but here I can choose to be
healthy or choose to be unhealthy; it’s my choice.”
Mixon said that the cafeteria has made some very good progress this summer.
“It’s going to be a great year and we all have to work together to make this a great year,” she said.
“We’re just going to work with it and do what we have to do. I think the students will see the management
change over the summer, and that it was good and needed to happen.”