The Art of Habersham

Umoja in Swahili means ‘unity’. What better way to describe such a beautiful collection of expressive art as we have been privileged to view at Mason-Scharfenstein Museum?
The word that the Davis’ have named the collection, Umoja, is appropriate to the expression.
It is a first for Museum Director Daniel White. “It” is a collection that has been borrowed from Norm and Carnetta Davis, and has been on display in the museum for the last two weeks.
Norm and Carnetta Davis began collecting continental African art such as tribal masks and shields, until they recently began exclusively collecting from state-side African- American artists. The pieces at the museum represent only one-third of the total collection, and it was a tough one for Daniel White, Director of the Mason-sharfenstein Museum, to pick out just what he wanted. “There were some that once we got them here, I couldn’t work out just how to display them, so I’d have to trade them for another piece,” said White.
After personally previewing the collection and receiving a binder of all the works for further review, White also personally packed and transported the pieces. The most difficult part of this collection was how to display them all without overpowering each other or not doing them justice. All the pieces on display are beautiful, powerful, and emotional works of art. There are 18 pieces, with only two from the same artist. There are prints, drawings, and collages. The variety shows several different processes.
From extremely colorful and bright works, to the more subtle shades of creams, browns, black and white, all the pieces are intricate.
What sets this collection apart from the other collections that the Mason-Scharfenstein Museum has had is, quite simply, the artists themselves.
Each artist that is on display is African-American. Male or female, nearly all were educators as well as artists.
This was an important part of their art, since they had more time to focus on what they wanted to do with their art, without having to rely on that skill alone for income. Some of the artists on display include: Hale Woodruff (1900-1980), Freddie Styles (1944-), Cedric Smith (1970-), Fred Jones (1914-2004), Larry Walker (1935-) and his daughter Kara Walker (1969-).
This is the very first display to come from a collection of multiple artists, and also the very first display of all African-American artists.
White said, “It’s a view through the lens of what it’s like to be an African-American artist.”
What a beautiful view that has turned out to be. 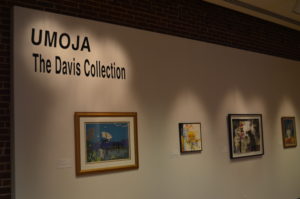