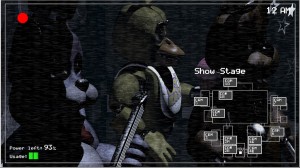 You’re sitting in a room made up of only dark blue walls. In the halls outside, there are
creatures looking through the windows in the doors. You don’t know what they’re there for
but you do know one thing: you cannot escape.
Welcome to the new indie horror game “Five Nights at Freddy’s.”
“Five Nights at Freddy’s” is a point-and-click PC game developed and published by
Scott Cawthron. After its full version released on Aug. 18, it gained a huge fan following
thanks to several YouTube personalities, such as Markiplier and the Rooster Teeth crew,
streaming their playthroughs of it and making it go viral.
The story of the game is that you, the player character, have taken a night watchman job
at Freddy Fazbear’s Pizza. All you have to do is sit in your office and watch the camera
feed in order to prevent any damage from occurring to the four animatronic animal
mascots the restaurant uses.
The mascots are Freddy the bear, Chica the chicken, Bonnie the rabbit, and Foxy the
fox. The only problem is that at night the animatronics roam the halls and want to stuff
you into a Freddy Fazbear suit. That wouldn’t be so bad if the suit wasn’t filled with a
metal skeleton that would crush you.
“Five Nights at Freddy’s” capitalizes on the aspect of defenselessness that made other
games like “Amnesia” and “Outlast” so popular. However, it takes it to an entirely new
level. You cannot even run away.

As the player character, you are forced to sit still in a chair where your only actions are
turning your head, pulling up a security camera feed, and clicking to turn on and off lights
and to close the doors to the room.
Each action takes up a portion of your limited power supply. The percentage in the
lower left of the screen slowly, or quickly depending on how you play, ticks down as the
night drags on and creates a great deal of tension for the player.
The limitations of the player are combined with the slow progression of action through
out the five levels of the game. Each of the five nights becomes progressively more difficult
as well as the fact that throughout each night, as hours tick by, the animatronics become
more and more active.
Each scare that the game produces is made even more frightening by the atmospheric
buildup created by the slow increase in difficulty, defenselessness of the player and the use
of sound cues to signal the movements of the anamatronics. The game also employs the
use of 90s-style graphics which make the animatronic characters even more terrifying.
The game is available through Steam for $4.99. It runs on Windows XP, Windows Vista,
and Windows 7 and up. Sorry, Mac users, you’ll have to wait a little longer for a port.