The quest for cool

“South Park” has been on the air for 17 years and continues to be one of the funniest television shows out there. That being said, there has never been a “South Park” video game released that did not feel like a cash-in on the property name.
With “The Stick Of Truth,” the show has burst onto the gaming scene with its signature humor intact.
This is due to the creators of “South Park,” Trey Parker and Matt Stone, being heavily involved in the production of the game. This results in a very enjoyable and distinctive RPG.
The plot is fairly straightforward. You play the new kid in town and, on orders from your parents to make friends, joins the kids of South Park in an epic role playing game where humans are at war with elves.
From the beginning, you run into favorite characters such as Butters, Cartman, and Kenny and will eventually see every notable character in the series by the end of the game. The references to the show are everywhere in this game, as well as the series’ sometimes questionable humor.
All of the jokes and references wouldn’t stack up to anything if the gameplay wasn’t up to par, but “The Stick Of Truth” manages to be a fun game to play as well.
The battles take place in turned-base scenarios much like old style RPGs. The new kid has several types of attacks than can be improved with well-timed button presses, and the humor transcends into the battles themselves.
There are 4 classes to choose from, but they all play relatively the same besides the special abilities that are connected to each class.
Attacks also have a charming child-like vibe to them. Weapons include bats, golf clubs, suction-cup arrowsand dodge balls.
The light-hearted nature of the game is a welcome change to the usual darkness of the genre as of late. Leveling up is a traditional XP system, and there are also permanent upgrades you can unlock based on how many Facebook friends you get in the game.
While the comedy is typical of “South Park,” it is not all toilet humor.
There are several pokes at the video games themselves that include making fun of audio logs, quest structure, and the combat style the game utilizes.
These jokes are smart and acknowledge the trends games have been using on a regular basis.
The game, while short for an RPG, can last between 10-12 hours. This actually helps the pacing as gags don’t wear out their welcome and become stale.
Players also go into many different and unique areas that will probably never be seen in another video game.
The only technical issue I found was the game sometimes slows down when moving into another area, but this never caused any problems gameplay wise.
This game is one of the best adaptations of a license and is one of the funniest games ever. The humor is great, the story and gameplay is solid, and the pacing is pretty quick.
Also, and most importantly, it feels like “South Park.” 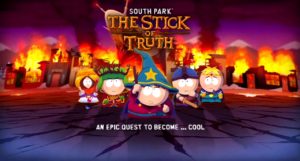