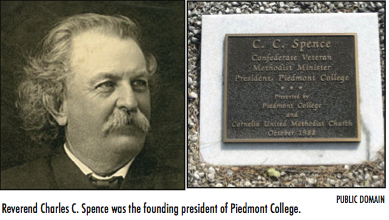 By FLETCHER DEAL
Staff Writer
If you were to walk through Piedmont today, you would see many fliers and advertisements for student clubs, organizations and activities, all separate from academic activities. However, there wasn’t always a variety of these student activities.
These next few columns willchronicletheevolutionof student life on campus as it morphs into what the college has today.
The columns will step through the history a school that had three societies to the Piedmont of today with nearly
40 clubs and organizations. In the early years of the college, 1897-1903, there were only three distinct societies for students to join and be a
part of. Two of these were for men,
the J.S. Green Debating Soci- ety and the Protropian Debat- ing Society.
The J.S. Green Debating Society was the first to be formed, but when it fell into astagnantperiodsomemem- bers broke away to form their own society, The Protropian Debating Society.
They named the group from the Greek pro meaning “forward” and tropos meaning “turning.” According to Lane, “This society flourished, and as it grew, members of the J.S. Green De- bating Society reestablished themselves in 1899. Both so- cieties continued for many years.”
The women on the campus had only one formal society to join. Workers for Knowledge, or WFK, was established in 1897, but until the first program was held later that year the meaning of the initials were not known.
Members of the WFK primarily devoted itself to the study of past civilizations, and to its credit, the society produced the campus’ first annual, the “Zawana.” They produced a second annual but no after.
Another factor in the life of students on any campus is the rules that the institution enforces. In 1897, Piedmont wasafarstricterplacethan it is today. Some of the more interesting rules for girls are as follows.
“Girls must not commu- nicate with young gentlemen without special permission.”
“All must obey rising, retiring,
prayers, and school bells, and must be ready in five min- utes after the ringing of the college bell to accompany the lady teachers to the school room.”
“No writing or receiving notes from young gentlemen is permitted. If a note is sent, it is to be taken to Mrs. Spence and her direction in the matter is final. No correspondence with young men, unless the proper person writes to the president and plainly states the correspondence meets his or her approval.”
Discipline was also harsh, “Brother Spence used to whip the boys for their sins. One boy got a whipping every few days,” said Lane.
It is safe to say that Piedmont was a much different place, but this was a stepping stone to giving it the student life it has today.