Looking Forward to a Homerun Season 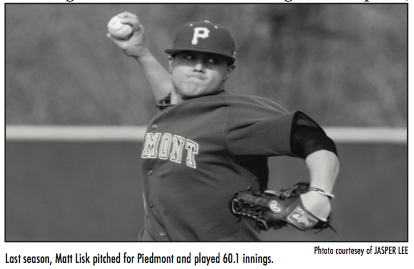 By ALEXANDRA SMITH
Contributing Writer
Competing for the first time in the USA South Conference, the Piedmont baseball team is looking forward to a tougher schedule that other Piedmont teams have already faced.
The tough competition and condensed schedule will challenge the team in many ways.
The players are looking forward to playing in a conference that is nationally known.
This confidence can be attributed to the experience that the team already has with these opponents.
“About half of our schedule is teams that are among the top ranked teams in the nation,” said Garret Lovelace, a catcher for the Lions.
In order to prepare for this tougher competition, Lovelace said the team is utilizing video as a training tool for the first time this season.
Assistant coach Justin Scali explained the goals the coaches have established for this season.
“Our goals for off the field include getting every player over a 3.0 GPA and maintaining the 3.4 team GPA we had last semester. Our on-the-field goals are to get better every day and focus on the little things. If we do that, the big things wil take care of themselves.”
During the first week of practices, unending rainfall forced practices inside to the indoor cages.Senior shortstop Matt Youtsey said, “The indoor cages have been a blessing this week.”
“The thankful players have been able to exercise their hitting skills and agility workouts using this facility,” said senior infielder Matt Youtsey.
Lovelace emphasized the team has experienced great chemistry so far this season, something that is important when tackling a new feat.
Some players expect the game against Christopher Newport University to be their biggest challenge and the game they are looking forward to the most.
On Jan. 16, the USA South website released the 2013 USA South Baseball Coaches’ Pre- season Poll.
In the poll, CNU ranked first, with eight coaches voting for CNU for 64 points.
Piedmont ranked second in the rankings with 46 points,
and one coach voted for Piedmont to have the best record this season. Piedmont is tied for second with Ferrum College.
“Our expectations for USA South play are to be challenged over eight three- game weekends,” said Scali.
“We have played all the USA South teams before and expect them all to be good. We will have to dominate the rutine lays and execut well to be successful.”
Some players have special games they are looking forward to, like Matt Lisk, a junior pitcher for Piedmont.
Lisk said, “My younger brother is a freshman at Greensboro. My whole family will be there, and I am looking forward to playing against him.”
Additionally, Lisk said the team must buy into the program in order to be victorious this season.
Because many opponents in USA South are in states as far away as Virgina, Piedmont will have to travel greater distances to play.
The new conference created scheduling problems for the Lions because the season has been compacted.
Play starts earlier this season and there is no post- season competition.
The champion of regular season games will be the winner for the conference, according to John Dzik, Piedmont’s athletic director.