STUDENT VS STUDENT: Seasons one and two of American Horror Story

By FLETCHER DEAL
Staff Writer
Season one of “American Horror Story” (AHS) drew in millions of viewers during its time on FX in the fall of 2012.
The show tied with “Fall- ing Skies” of TNT as the big- gest new cable show among adults 18-49.
The first season follows the lives of Ben, played by Dylan McDermott, Vivien, played by Connie Britton and Violet Harmon, portrayed by Taissa Farmiga, as a struggling fam- ily that moves across country to Los Angeles to patch up their family.
They soon discover that their below-market value mansion was priced that way because of a murder/sui- cide that occurred between the previous owners of the house.
Soon, they start having to deal with their nosey kook of a neighbor, Constance, played by the incomparable Jessica Lange.
As the season goes on, viewers become entranced by the story of the house as well as its past tenants, one of the more famous being TateLangdon, played by Evan Pe- ters.
Langdon initially poses as a patient of Ben’s and eventu- ally falls for Violet.
One cannot discuss AHS without mentioning the creepy maid, Moira, a dual role played by Frances Con- roy and Alexandra Brecken- ridge.
Moira appears as an old crone of a maid to Vivian, but as a slim and sultry woman to Ben.
This causes more of a rift in the family.
AHS is one of the best TV shows I have seen in a while, but viewer be warned, it will keep you up at night.
One last thing: AHS is an anthology, which means each season is a different story, and for the most part, a different cast aside from a few major actors who have become reg- ulars.

By EMILY CLANCE
Copyeditor
The second season of “American Horror Story,” FX’s hit anthology series, is set in an asylum called Briar- cliff Manor in Boston in 1964.
Jessica Lange returns, this time as the formidable Sister Jude, a nun who presides over Briarcliff with an iron fist.
Joining her are some more familiar faces, such as Evan Peters, Zachary Quinto, and Sarah Paulson as Lana Win- ters, an intrepid reporter who is determined to expose the terrible abuses that go on at Briarcliff and get it shut down once and for all, only to be im- prisoned there herself.
The series follows several characters and the toll the asylum takes on them over the years.
No one who enters Briar- cliff comes out the same, not even the nuns who work there.
Over the 13 episodes in the season, the audience watches each character change, and by the end some of them are barely recognizable.
Though all the storylines seem convoluted at times –
Aliens! Demons! Serial kill- ers! Nazis! – they are all pulled together quite grace- fully in the last few episodes of the season.
Everyone gets a proper ending, but no one is truly happy.
The show is an intense ride and definitely not every- one’s cup of tea.
It’s violent and disturbing at times, but it’s incredibly addicting.
The characters are believ- able and very easy to get at- tached to, and the cinema- tography is just stunning.
“American Horror Story” is a beautiful series, both in the writing and in how it looks, and each season promises a new thrill for the audience.
Last year it was “Murder House,” this year was “Asy- lum,” and fans of the show already have several theories about what the upcoming third season will be about.
The seasons are short, and the wait until the Octo- ber premier date is long, but “American Horror Story’s” sheer quality more than makes up for it. 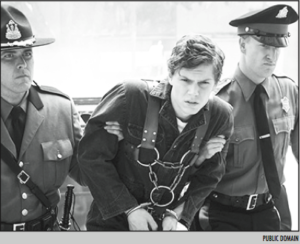