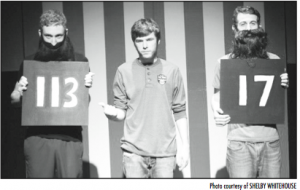 By DANIELLE MORGAN
Assistant Radio Manager
Whoever said three is a crowd must have never seen “The Complete History of America (Abridged).”
Theatre majors Matt McClure, Oliver Merritt and Justin Gilleland performed in the play made famous by The Reduced Shakespeare Company.
The chemistry the three exhibited was phenomenal.
They performed their show free of charge in the Piedmont College Blackbox Theatre on Jan. 18 and Jan. 19.
The purpose of this show was to shed a loving, humorous light on the America we all love.
Throughout the duration of this play, nothing was protected from potential mock- ing.
I had the pleasure of go- ing to see it opening night. I wasn’t quite sure what I was going to expect.
As a lover of U.S. history, I was extremely intrigued to see how they were going to make a comedy out of this. There was a disclaimer that there would be adult humor in the play. I was expect- ing a little bit of adult humor, but to my surprise, there was more than I was prepared for. I was worried at first, as I personally did not feel that a play with this much adult content would be well re- ceived by the audience. However, I was wrong as most of the adult humor was received as tastefully offensive.
It would difficult to name a Those that did not make it to either of the showings of the play seriously missed out.
Like “The Complete His- tory of America (Abridged)” Facebook page said, “You’ll probably come in knowing a little bit of history and you’ll leave knowing about the same amount.”
There were so many ele- ments to the play, from sexual innuendos to jokes about Henry Johnson, plus movie references from all kinds of films including a personal fa- vorite of mine, “Casablanca.”
I, along with everybody else in the audience, was laughing all the way.
I hope McClure, Merritt and Gilleland will team up again and bring some more comedy to the Piedmont College Theatre Department.
character that stole the show, because all three of them did a fantastic job.
They were very deep into character, and I loved the idea of them wearing red, white and blue throughout the whole show.
One character that did surprise me was Merritt. I thought he had the witti- est lines and the best scenes throughout the entire show.
From rapping in one scene to cross-dressing in others, he was truly a hoot.