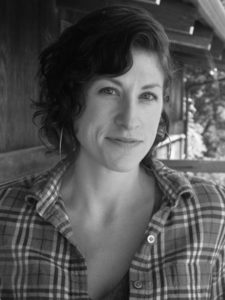 Aliu was introduced to reading at an early age.

“At the time, we had an old black and white television that got about two stations,” Aliu said about growing up.

“So instead of watching TV my brother used to read me things like the ‘Bernstein Bears’ and Richard Scarry’s books.”

It was not until her junior year of college that Aliu discovered her passion for writing and literature upon signing up for Introduction to Fiction course.

According to Aliu, she signed up for the class because she was planning on becoming a nurse and had some general electives to fulfill.

“By the time that first class was over, I had decided to become an English major, simply because no other class had ever made my stomach turn from excitement and possibility the way that class did,”  said Aliu.

Aliu’s first book was a collection of short stories called “Domesticated Wild Things,” published in September of this year.

“It was, of course, thrilling and wonderful, but also a bit terrifying at first to realize that I no longer have absolute control over the work,” Aliu said about the publication process.

“The stories are now in the world for people to love or hate or dismiss, and though I catch myself still editing the stories privately, I have to accept that they’ve left the nest.”

Aliu writes literary fiction and shies away from genre fiction like mysteries, thrillers and  romance.

“[Genre fiction does] focus more on plot than character, and I’m far less interested in what happens than why it happens, “ said Aliu.

“I want to understand the character’s interior world—the one in which they have choices—rather than the exterior world, where in many cases things simply happen to them.”

Aliu just finished the fifth re-write of a novel that she has been working on for a long time.

“The earliest seeds were sown seven or eight years ago, and I’ve been working on it off and on since then,” she said.

“As an aspiring writer, it will be inspirational to hear all of her advice and the things she has to share with us.”

When visiting Piedmont this week, Aliu will sit in on  O’Keefe’s Short Stories class as they read her story “The Kill Jar.”

Afterwards, Aliu will hold a reading from her collection “Domesticated Wild Things” in the Mason-Scharfenstein Museum of Art at 4 p.m.

“To aspiring writers, I would emphasize that endurance and discipline is absolutely critical,” said Aliu.

“In other fields, if you were told ‘no’ 99 out of a 100 times, you might start to question your choice of occupation. In writing, if you place one piece out of a hundred, you’re doing just fine.”