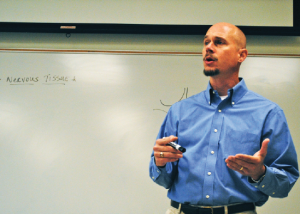 For over twenty years, Rick Austin, 47, of Demorest has been teaching classes at Piedmont College, such as Human Anatomy and Physiology I and II.

However, Austin will serve a different position in Habersham County other than a professor of biology at Piedmont.

On Nov. 5, Demorest residents voted Austin to replace Malcom Hunnicutt, who served as Demorest mayor for over 35 years.

During the election, Austin received 56.73 percent of the votes, and Hunnicutt received the remaining 43.27 percent.

Austin has served in other political positions, including county commissioner.

He also served a term in the Georgia State House of Representatives.

Austin graduated from Piedmont with a Bachelor’s degree in biology in 1990.