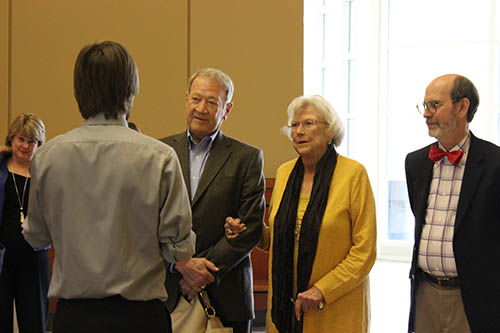 On Wed., Oct. 13, the Swanson family visited the Swanson Center, which is the building on the Piedmont campus that houses the theater and mass communications departments.

The Swanson family visited the building named after them in order to be honored for their contributions for new digital equipment in the television studio control room, studio and Mac Lab.

Kay and Dean Swanson were impressed as they were escorted around Swanson Center by President James Mellichamp and Dale Van Cantfort, mas communications department chair.

The Swansons said they were very happy with how their contributions helped with the new upgrades in the center.

“This is very impressive,” said Dean Swanson. “I’m glad we could do it.”

In an interview with Associate Professor Jennifer Arbitter, she said that one of the Swanson’s goals in contributing to the building was to provide state-of-the-art education to students.

“When we told them that we were working on upgrading equipment, they were very interested in helping us with that,” Arbitter said.

Arbitter said that the mass communications department is currently working with Windstream, the school’s Internet and television provider, to get high definition digital on the school’s television channel PC TV.

In the Mac lab, there are all new Mac computers.

The new Macs have been updated with new programs and software like Adobe Premier, Photoshop, DreamWeaver, Fireworks and more.

Instead of recording videos on tapes, students can now use an SD card to record video.

“Apple is phasing out of disc drives because they do not think people will need DVD’s anymore,” said Arbitter. “It’s [really] easy now because you can take the SD card out of the camera and put it into the computer.”

Freshman mass communications major Kayla Everett visited Piedmont while she was a senior at White County High School, which had a good television program.

“I was kind of skeptical about coming here because I wanted to make sure the transition from my high school was going up instead of down,” Everett said. “Now that the new equipment is here, I feel more confident in my major and that when I do graduate, I will be able to go out into the world and know how to use the equipment.”

Stewart Hall was named after Kay Swanson’s family, as Stewart is her maiden name.

Students can visit Stewart Hall, view pictures and read about her family history on the walls in the main lobby.

The visit ended in the Screening Room where Arbitter showed the Swansons a short video of some of the students using the new equipment.

In the video, some students voiced their happiness on being able to use the new equipment while here at Piedmont.

Junior mass communications major Brandon Williams said that he is grateful for the new equipment and its impact on him in the future of video.

“The equipment is definitely more complex because it is mainly quality and all of what you can do with the cameras,” Williams said. “The lighting and wireless microphones are just all around better on the cameras.”

After pictures were taken with the professors in the mass communications department and a few student, the Swansons were escorted by Mellichamp to his house for lunch.