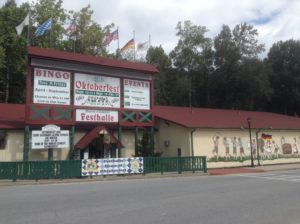 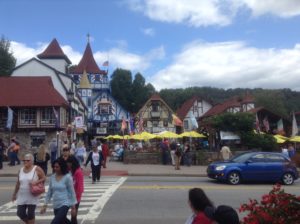 Helen is known as the small German-esque town in the Northeast Georgia mountains. They have lots of activities for families to enjoy like tubing, miniature golf and of course Oktoberfest.

The Oktoberfest originally comes from Munich, Germany. The fest in Helen isn’t as big as the one in Munich, but it does bring German life to the United States.

The Oktoberfest in Munich comes with many beer tents where thousands of people can sit and mingle with others, listen to some Bavarian music and enjoy drinking beer.

In Helen, the Oktoberfest is in the Festhalle building behind the Helen Square. Once you enter the building, you will see long rows of tables and chairs, a dance floor and the stage where the band plays.

People can order German food like Bratwurst, Weisswurst, krautsalat and more. If you want more choices, you can visit the German restaurants at the Helen Square.

Though Oktoberfest in Munich is open all day and night, in Helen they have different opening hours during the week, and there is a fee to attend the event.

However, after you pay the first time, you can come in and out the Oktoberfest as much as you want. Once Oktoberfest opens, you start to notice the women wearing dirndls, Bavarian dress, and the men wearing lederhosen, Bavarian pants with straps.

While enjoying the German food, you can also enjoy the band playing German music. Some of the songs they sang were in English.

The band also played some Sumba and the chicken dance song, which is really unusual at the Oktoberfest in Munich.

Sophomore mass communications major Manyi Eno has never been to Germany, but she said that attending   Helen’s Oktoberfest was an interesting experience.

“I thought the Oktoberfest was really cool. Even though it wasn’t Germany, I felt like it gave those who have never visited the country a little sneak peak into it,” said Eno.

“I did not feel like I was in Germany at all,” said Terschluse. “They still had a lot of American things at the Oktoberfest like American beer, food, and stores.”

Helen’s Oktoberfest is open for visitors daily until Oct. 27. Bring your friends and family along with you to experience some German traditions with food, music and beer.